Gujarat Election Results: Although it could win only one seat, the AAP emerged as a direct challenger to BJP in nine of the 27 ST-reserved seats. 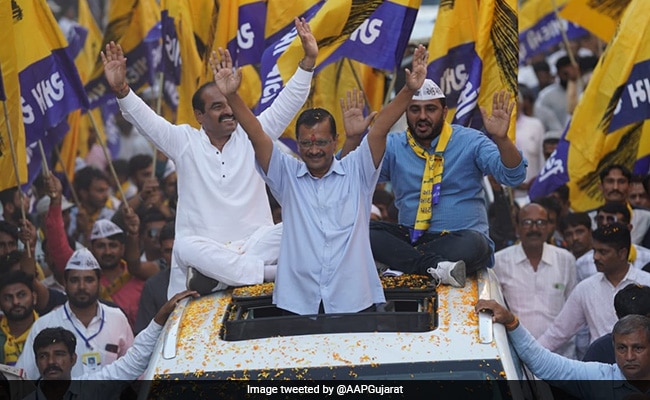 Gujarat Election Results: AAP swept aside Congress to find a footing in the tribal belt.

The Bharatiya Janata Party (BJP) clinched 23 out of 27 Scheduled Tribe seats in Gujarat as the Aam Aadmi Party (AAP), the new entrant in the state's politics, swept aside Congress to find a footing in the tribal belt.

Although it could win only one seat, the AAP emerged as a direct challenger to BJP in nine of the 27 ST-reserved seats.

The Congress won three seats, slipping big from its 2017 tally of 14 seats. The Bharatiya Tribal party (BTP), which had in 2017 polls won two seats in alliance with the Congress, was routed in all the 24 seats it was contesting.

The Congress and BTP fought this election independently.

The BJP more doubled its seat tally from 2017, cashing in on the split in opposition votes between the Congress and Aam Aadmi Party (AAP).

In Jhagadia, seven-time MLA Chhotu Vasava was defeated by BJP candidate Ritesh Vasava. Congress held on to Vansda and Danta seats. It managed to wrest control on Khedbrahma, where tribal leader Tushar Chaudhary defeated Ashvin Kotwal, who had held the seat on a Congress ticket until he switched to BJP.

"Several of our leaders polled an impressive number of votes and emerged as direct challengers to BJP even when we did not resort to distributing money and liquor like they did,” he told PTI. “People have started recognising AAP in the belt, and we will continue to work for them.” Political analyst Dilip Gohil said it was interesting to see how an urban party like AAP found its footing in some of the most backward tribal areas. "The way it attracted the tribal population is significant, showing how the tribals are turning aspirational," said Gohil.

AAP has seriously hurt Congress in a belt that was once considered a stronghold of the grand old party. This trend is unlikely to reverse, Gohil said.

"AAP planned beforehand to enter the tribal belt as it saw an opportunity there. It also shows that the tribal population is thinking differently," he said.

The Scheduled Tribe communities constitute around 14 percent of the state's population and are spread along its eastern belt with 27 seats in the 182-member assembly reserved for them.

This is only the third time since 1995 that the BJP's tally in the Scheduled Tribe reserved constituencies has surpassed that of Congress. Both the Congress and AAP promised to implement the Panchayats (Extension to the Scheduled Areas) (PESA) Act when voted to power in the state.

Kejriwal even promised to ensure that the tribal advisory committee under the Act will be headed by a member from the community.

The BJP, on the other hand, sought to highlight development work done by its government through allocation of a special budget for the tribal-inhabited areas.

While the Congress traditionally enjoyed tribal support through a network of institutions working in the region for education and social reforms, the BJP has made inroads in recent years, hard selling its Hindutva plank.