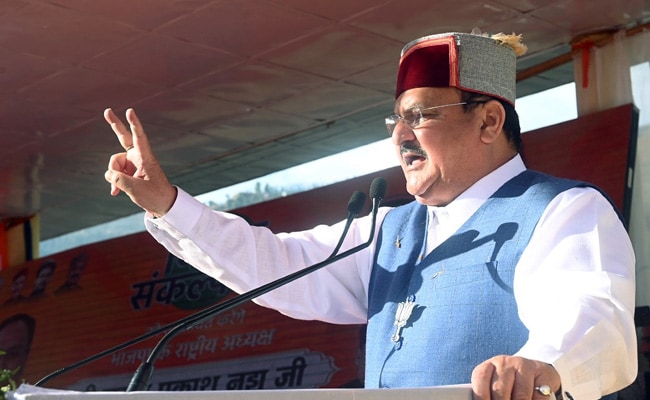 "A new party came to Gujarat. What did they do? Their top leader came with a piece of paper and said 'I write this to guarantee we will win the election and form government in Gujarat'. Such an irresponsible leader should today apologise to the people for the irresponsible statements," Mr Nadda said, alluding to Mr Kejriwal, who heads the Aam Aadmi Party (AAP).

"Till date, no one has seen a leader who has to carry a board on himself with the text 'main kattar imaandaar hoon (am an honest person)'. Such a mockery he makes of himself and his party. This shows and proves he is 'kattar baimaan (fully corrupt)'," Mr Nadda said.

The BJP has won 97 seats and is leading in 59 seats in Gujarat in yet another super-sized victory powered by PM Modi. It is set to win close to 160 of 182 seats, the best-ever for any party in the state.

The AAP's consolation came in the form of its "national party" status because of the Gujarat vote share. Mr Kejriwal's party won five seats in Gujarat and no seat in Himachal Pradesh.

Mr Kejriwal had campaigned in Gujarat trying to recreate what the AAP achieved in Delhi by rallying on the slogan of rooting out corruption.

Mr Nadda said the AAP's promises of freebies did not work as PM Modi has already launched many initiatives to help the poor and they are successfully running.