During the 'chintan shivir' (introspection camp), the Congress leaders and workers will analyse the election results district-wise and discuss the road-map ahead in view of the 2019 Lok Sabha polls, state party president Bharatsinh Solanki said here. 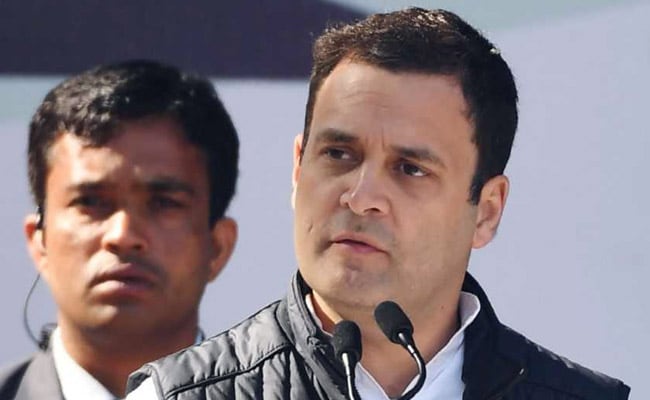 Ahmedabad: Two days after the Gujarat Assembly poll results, the Congress today began an exercise to analyse the electoral outcome at a three-day conclave that will be attended by party president Rahul Gandhi on Saturday.

During the 'chintan shivir' (introspection camp), the Congress leaders and workers will analyse the election results district-wise and discuss the road-map ahead in view of the 2019 Lok Sabha polls, state party president Bharatsinh Solanki said here.

In the elections, the results for which were declared on Monday, the Congress could not wrest power from the BJP even though its tally increased to 77 seats from 61 last time.

The Congress ally Bharatiya Tribal Party won two seats, and along with an independent backed by it winning his seat, the tally of the Congress-led alliance stood at 80, 12 short of the simple majority in the 182-member Assembly.

The BJP retained power for the sixth time, though with a reduced score of 99 seats against 115 in 2012.

The Congress performed well in rural areas of Gujarat but failed to make a significant mark in urban areas.

The venue of the conclave today and tomorrow is a resort in Mehsana district and on the third and final day, the venue will shift to Ahmedabad where Mr Gandhi will be present, Mr Solanki said.

Mr Gandhi, who campaigned extensively in the state for the Assembly elections, will address a gathering after the 'chintan shivir', Mr Solanki said.

Earlier in the day, Mr Solanki had said that Mr Gandhi would be visiting Gujarat on Friday.

However, he announced tonight that Mr Gandhi's visit has been rescheduled to December 23.

"The Gujarat Pradesh Congress Committee has organised the 'chintan shivir' with the aim of discussing the Assembly poll results and to provide a road-map to strengthen the organisation and increase its connect with the people, keeping in mind the 2019 Lok Sabha elections," Mr Solanki told reporters.

"For two days, we will meet here in Mehsana, and on third day, we will meet in Ahmedabad where Congress president Rahul Gandhi will visit to address party workers," he said.

Mr Gandhi will meet newly-elected MLAs as well as leaders from state's four zones--north, south, central Gujarat, and Saurashtra -- separately for four hours in Ahmedabad on Saturday, before addressing a gathering of party workers in the evening, Mr Solanki said.

Briefing the media about the outcome of the first day's deliberations at the camp, Mr Solanki said several Congress workers alleged the BJP used "corrupt and unfair means" to win the polls.

They said at several places, votes got transferred to the BJP even though people had voted in favour of the Congress, he said.

"Party workers were of the view that the BJP had used corrupt and unfair means to win elections. Several party workers said that local BJP leaders even announced the number of votes a day before counting. They said that the party failed to get votes even on seats where Congress had performed exceedingly well in local bodies elections," according to Mr Solanki.

Congress general secretary and election in-charge for Gujarat Ashok Gehlot, expressed satisfaction over the party's performance in the polls, while accusing the BJP of "misusing government machinery" and raising questions over the approach of the Election Commission.

"Both in terms of seats and campaigning, the Congress performed wonderfully well. Although we could not form the government, a message has been sent across that the BJP can have a tough time fighting the Congress even in the home state of (Prime Minister) Narendra Modi and (BJP president) Amit Shah," said Mr Gehlot, who is also attending the camp.

"The way the BJP campaigned involving Cabinet ministers with the prime minister himself making emotional appeals, the way they misused government machinery for polls, and the manner the Election Commission took decisions, we believe we have done exceedingly well," he said.

Senior Congress leader Shaktisinh Gohil, who lost from Mandvi in Kutch district, said the party could have formed government had it won 16 seats on which it got defeated by narrow margins.

However, he took solace in the fact that the BJP was reduced to "double-digits" despite an aggressive campaigning.

Promoted
Listen to the latest songs, only on JioSaavn.com
"At one point after forming the government in 1985, the Congress was reduced to a mere 32 seats. This time people have supported Congress in large numbers and we have increased our seat tally," he said.

"And after 1990, for the first time the BJP has been reduced to double-digits. We were defeated by small margins on as many as 16 seats. Had we won those seats, we could have formed the government," Mr Gohil said.