Gujarat's 'Moustache Man' Maganbhai Solanki On Why He Is Contesting Polls

Gujarat Election 2022: Meet Maganbhai Solanki, 57, the man proud of his gunslinger moustache who is contesting as an independent candidate from the Himmatnagar seat in Sabarkantha district, which is currently with the Bharatiya Janata Party (BJP). 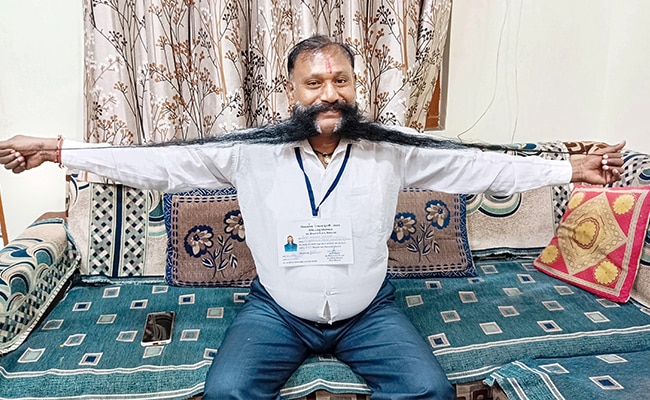 Maganbhai Solanki, 57, proud of his gunslinger moustache, is contesting from Gujarat's Himmatnagar

"Moochein ho to inki jaisi, warna na ho," says a voter quoting a dialogue from the famous Bollywood film 'Sharaabi' while pointing out at a man curling up his 2.5-feet-long moustache and seeking votes from traders at a market in Himmatnagar.

Meet Maganbhai Solanki, 57, the man proud of his gunslinger moustache who is contesting as an independent candidate from the Himmatnagar seat in Sabarkantha district, which is currently with the Bharatiya Janata Party (BJP).

Voting will be held in the seat on December 5 during the second phase of the Gujarat Assembly elections.

Mr Solanki, who retired from the Army as honorary Lieutenant in 2012, says he loves contesting elections and has been doing so since the 2017 Gujarat Assembly polls.

"I was then a candidate of the Bahujan Samaj Party (BSP). I lost but did not give up. In the 2019 Lok Sabha polls, I contested as an independent. This time also I am contesting as an independent," he told Press Trust of India.

Mr Solanki claims he served at different frontiers from the west, east to the north, and says his moustache garners attention wherever he goes during the campaigning.

"When I was in the Army, my moustache used to attract attention as senior officers always admired it. When I am contesting elections, people get amused seeing my moustache. Children come out and try to touch it, while youngsters ask for tips on how to grow such a moustache," he said.

He said if elected, he would appeal to the government of Gujarat to bring in a law to encourage the youth to grow moustache and will also raise the issues pertaining to the ex-service personnel.

The BJP has fielded Virendrasinh Zala from Himmatnagar, the Congress has nominated Kamleshbhai Patel, and the new poll entrant Aam Aadmi Party (AAP) has given ticket to Nirmalsinh Parmar.

Unemployment is a major issue in the area and the BJP, Congress and AAP have promised to bring industries to the region if voted to power.

Mr Solanki said he would urge the state government to bring in a law to inspire the youth of Gujarat to grow moustache.

"Whoever grows a moustache, the government should pay some amount for its maintenance," he said.

Mr Solanki also said if he wins, he will take up in the Assembly the issue of the rights of ex-service personnel.

"I have been fighting for the rights of ex-service personnel as jawans (soldiers) these days retire early due to policy changes. Most of them are jobless after they retire from at the age of 45-46. Earlier, the retired jawans used to get re-employed in government offices, but now that has also stopped," he claimed.

Apart from his family members, some retired Army personnel, who are his friends, are also campaigning for him.

Mr Solanki was inspired by his father to grow a moustache, and by the time he joined the Army at the age of 19, he had a long moustache.

"In the Army, I got a special allowance to maintain my moustache. I was known as moochwala in my regiment. My moustache is my pride. It makes me stand out in the crowd," he said.

His opponents from the AAP, Congress and the BJP do not attach much importance to his candidature.

But, Mr Solanki says he will not give up till he wins an election.

"We were taught in the Army not to give up until the last bullet and the last drop of blood. The first time when I contested, I got 1,000 votes, the second time it was around 2,500 votes. This time I hope to improve my tally," he said.

Himmatnagar in Sabarkantha district is considered one of the safest seats of the saffron camp.

With around 2,80,000 voters, the Scheduled Caste comprises nearly 11 per cent, whereas the Scheduled Tribes comprise nearly three per cent, Muslims 3.2 per cent, while Patels, Rajputs, and Kshatriyas include the rest of the electorate.

Voting is underway today in the first phase of the Gujarat Assembly elections in 89 seats. The remaining 93 seats, including Himmatnagar, will go to polls on December 5.

The counting of votes will take place on December 8.