A video of the incident showed a girl climbing Rahul Gandhi's van, getting close to him and clicking selfies as SPG personnel looked on. 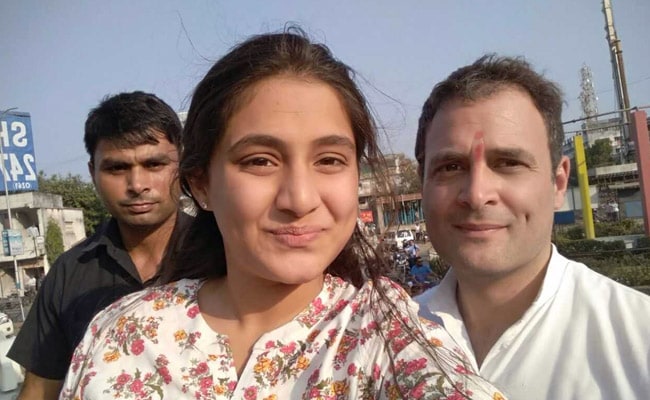 Bharuch: As Rahul Gandhi went around Bharuch on his road show on Wednesday, a young girl got aboard his van to click selfies with the Congress vice president.

A video of the incident showed the girl climbing Mr Gandhi's van when it reached the Kasak Circle area, getting close to him and clicking selfies as SPG personnel looked on. Mr Gandhi was seen helping her get down and even shook hands with her after she got off the van.

The girl, identified as Mantsha Ibrahim Sheth, a class 10 student, said Mr Gandhi obliged after she requested him for a selfie.

#WATCH: A girl gets onto Congress Vice President Rahul Gandhi's vehicle during his roadshow in #Gujarat's Bharuch, takes a selfie with him pic.twitter.com/blEnRXS2FK

"I was following him for quite a long time during the road show. He gave me flowers and I asked him can I take selfie with him, to which he agreed," she told reporters.

Mr Gandhi began his three-day campaign tour of south Gujarat on Wednesday in the run up to the next month's Assembly elections.
Comments
Rahul GandhiGirl climbs Rahul Gandhi van for selfies

"Vicious" Campaign Against Me: Umar Khalid In Court On Delhi Riots Case