Gudi Padwa in Marathi: To celebrate Gudi Padwa, a harvest festival, a special Gudi flag, generally of yellow or red colour, is made and is garlanded with flowers, mango and neem leaves. 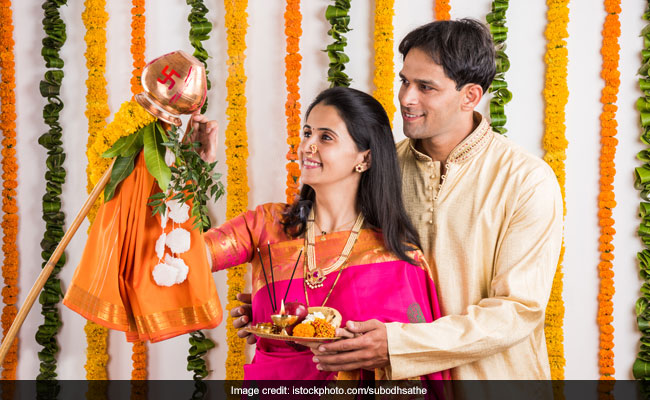 Gudi Padwa images: The festival brings communities together. People send special wishes to each other.

Gudi Padwa, the Maharashtrian new year, signifies the welcoming of spring. During this time, Rabi crops, which have reaped, are ready for the harvest festival marks this significant development for the farmers. The Gudi Padwa festival is also known as Samvatsar Padvo and will be celebrated on April 6. Mostly celebrated on Maharashtra's Konkan areas, Gudi Padwa is a day when families come together, wear new clothes, prepare special Maharashtrian dishes and celebrate the day together. Maharashtrians celebrate the day by decorating their houses and also make colourful rangoli at their homes. In Karnataka and Andhra Pradesh, the festival is celebrated as Ugadi and is observed by Telugu Hindus. The day also marks the beginning of Chaitra Navratri, that lead up to Ram Navami. The Sindhi community celebrates this day as Cheti Chand as the new year and observed as the emergence day of Lord Jhulelaal. Prayers are offered to Lord Jhulelaal and the festival is celebrated by making sweet delicacies.

Gudi Padwa 2019: How To Make Gudi, and its significance:

To celebrate Gudi Padwa, a special Gudi flag, generally of yellow or red colour, is made and is garlanded with flowers, mango and neem leaves. It is topped with upturned silver or copper vessel signifying victory and achievement. Gudi is believed to ward off evil, invite prosperity and good luck into the house.

Historically, the Gudi symbolizes Lord Rama's victory over Ravana and the happiness and celebrations that followed. Since a symbol of victory is always held high, so is the gudi (flag). The festival commemorates the coronation of Rama post his return to Ayodhya after completing 14 years of exile.

How Gudi Padwa Is Celebrated: