The government today went live with GST Council's website which contains all the fine details about the new tax regime. 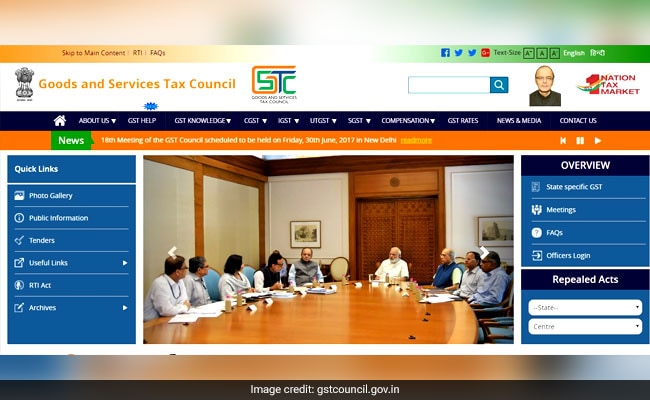 The Council's website has all the details about the soon-to-be implemented GST.

Much-awaited nation-wide tax Goods and Services Tax (GST) will be rolled out on mid-night of June 30 and will come into force from July 1. The government today went live with GST Council's website which contains all the fine details about the new tax regime which is being touted as the biggest reform since Independence. The incoming indirect tax regime - GST - will subsume a variety of central and state levies. With GST, the government aims to create a common market, preventing 'tax-on-tax' and making goods and services cheaper.

The Council's website has all the details about the soon-to-be implemented GST. The website is a one stop for all the information for an individual who wants to know on tax rates under GST, details on compensation, details on IGST, CGST, SGST and UTGST.

The website also has a link titled as 'GST Help' under which all the details about the constitution of GST, implementation committee, standing committees and sectoral groups for smooth roll-out of GST.

Meanwhile, government has roped in Bollywood megastar Amitabh Bachchan to promote Goods and Services Tax (GST). The Central Board of Excise and Customs will be making the 74-year-old Mr Bachchan brand ambassador for GST. A 40-second video featuring him has already been shot and is being circulated.

Promoted
Listen to the latest songs, only on JioSaavn.com
The historic Central Hall of Parliament will host a midnight function on June 30 to launch the sweeping tax reform of GST, reminiscent of India's tryst with destiny on the midnight of August 15, 1947.

The government will use the circular-shaped Central Hall, perhaps for the first time, to launch a new taxation system that is set to dramatically re-shape the over $2 trillion economy.