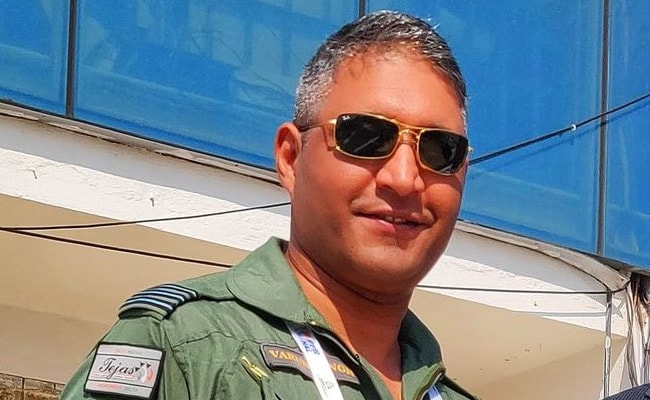 The body of Group Captain Varun Singh, the lone survivor of the IAF helicopter crash earlier this month that killed Chief of Defence Staff General Bipin Rawat and 12 others, would be flown to Bhopal by a service aircraft on Thursday, IAF sources said.

A decorated air warrior, Group Captain Varun Singh died at the Air Force's Command Hospital here on Wednesday, a week after he was seriously injured in the crash near Coonoor in Tamil Nadu.

The body would be moved from the hospital tomorrow at 10 am to Air Force station Yelahanka, where wreaths would be laid as a mark of respect to the departed, sources said.

From Yelahanka, the body would be flown to Bhopal, and the funeral is planned on December 17, they added.

Initially hospitalised at Wellington in the Nilgiris district of Tamil Nadu with 80 per cent burns, Singh was shifted to the Command Hospital here on December 9 for higher treatment.

General Rawat, his wife Madhulika Rawat, and 11 other defence personnel were killed on December 8 when the Mi17V5 helicopter carrying them crashed.

"Extremely saddened by the passing away of Group Captain Varun Singh. The nation has lost a brave soldier. I extend my deep condolences to his family," he said.

Friends and well-wishers of the family reached his residence here soon after getting news about the demise of the IAF officer.

Mr Singh's father was very optimistic about his surviving skills as he had earlier survived a life-threatening emergency while flying a Tejas aircraft during a sortie last year.

The air warrior was conferred with the Shaurya Chakra, India's third highest peacetime gallantry award, in August this year for displaying exemplary composure and skill when his Tejas aircraft developed a technical snag during the sortie.

The 39-year-old officer, who was known to be an excellent test pilot, is survived by a 11-year-old son, an eight-year-old daughter, and his wife. The Group Captain's family originally hails from Ghazipur in Uttar Pradesh.