Govt will do everything in its power to prevent future attacks: PM 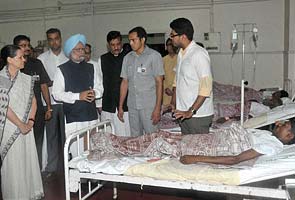 Mumbai: Strongly condemning Wednesday's "barbaric" bomb blasts in Mumbai, Prime Minister Manmohan Singh has said that the perpetrators must be pursued relentlessly to bring them to justice quickly and promised the government will do everything in its power to prevent such attacks in future. (Pics: Terror revisits Mumbai)

Dr Singh, who arrived in Mumbai along with Congress President Sonia Gandhi to take stock of the situation, said he understood the "shock and outrage" of the people of Mumbai and "I share their pain, anguish and anger".

"I cannot find words to condemn the barbaric acts of terror that resulted in the senseless killing and injuring of innocent people in Mumbai yesterday," Dr Singh said in a statement. (Read: PM's statement on arrival in Mumbai)

"I have come here in solidarity with the people of Mumbai," he said while extending his "deepest condolences and sympathies to those who suffered in the terrible tragedy". (Read: Understand shock and outrage, says PM in Mumbai)

Dr Singh also said he has asked Union Home Minister P Chidambaram and Maharashtra Chief Minister Prithviraj Chavan to continue to coordinate their efforts and resources to "relentlessly pursue the perpetrators. They must be brought to justice quickly and be subject to the rule of law that they have sought to subvert."

He sought the cooperation of all citizens in this effort, saying "we owe this" to the grieving families.

He also assured the people that "the government will do everything in its power to prevent such attacks in the future."

Dr Singh and the Congress President also visited the injured in hospitals and shared the feelings of grieving Mumbaikars.

The two leaders, accompanied by Maharashtra Chief Minister Prithviraj Chavan, visited Saifee and JJ Hospitals, to comfort the injured trying who are recovering from the shock and trauma of the triple explosions.

The Prime Minister praised the state administration, saying it had risen remarkably well after the serial blasts last evening.

"The state administration has risen remarkably well on this occasion. Within an hour of the attacks, the injured were rushed to the hospitals," Dr Singh said after visiting the injured.

"There has been a remarkable coordination of efforts. Now, the task is to find out who the culprits are and bring them to justice," he said.

"Terrorists have struck once again. We have to make every effort to ensure that the injured recover their normal self. To those who have lost their dear ones, we express our sympathies."

"This time, there was no prior indication of the attack. Terrorists had the advantage of surprise," he said.

Dr Singh and Sonia Gandhi spent around 25 minutes at Saifee Hospital where 37 of the 131 wounded are undergoing treatment.

They spoke with the patients, most of whom have suffered burn injuries, and wished them speedy recovery, besides inquiring about their condition from the doctors.

Maharashtra government has already announced free treatment for all the injured.

Promoted
Listen to the latest songs, only on JioSaavn.com
Earlier, he reviewed the security situation in the aftermath of the attack with Governor K Sankaranarayanan, Chief Minister Chavan, his deputy Ajit Pawar, Home Minister R R Patil and other top state officials.