Govt says no evidence of Goonda Raj by Thackerays, others 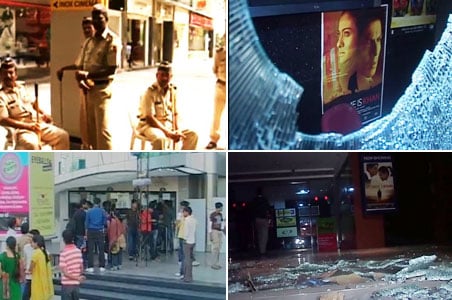 Mumbai: When the Shiv Sena threatened to stop Shah Rukh Khan's new film from being released earlier this month, many asked why the Maharashtra government wasn't taking legal action against the party's leaders.  The government finally said its legal experts would examine statements made by Uddhav Thackeray and his party men to see if they could be charged with inciting violence. Nothing has come of that threat.

So is the government serious about tackling and stopping the goonda raj regularly resorted to by Uddhav , his estranged cousin, Raj, and other politicians?

Prove it, demands former Mumbai Police Commissioner Julio Reberio.  He has gone to court to ask that in four recent cases where political workers vandalized property, their leaders, and not just their workers, should be arrested, and should be forced to pay damages.

In all four cases, despite substantive evidence, the government has told the Bombay High Court that party leaders did not help plan or execute the attacks.

In January 2009, Shiv Sena MP Sanjay Raut was caught on camera leading an attack on Mumbai's Intercontinental Hotel. The mob vandalized the hotel's lobby and kitchen - payback, they said, for 21 workers being sacked.  But the government says it has no evidence to prove Raut was part of the attack.

A day later, Congress leader Narayan Rane's men were seen attacking the office of a Marathi newspaper because it ran an editorial that was critical of Rane.

Six days later, supporters of Raj Thackeray's Maharashtra Navnirman Sena attacked the office of the Mumbai University Registrar. They claimed that the university was not giving enough importance to Marathi courses.

And a few weeks later, Raj's men attacked a beauty parlour, accusing it of covering a prostitution racket.

Promoted
Listen to the latest songs, only on JioSaavn.com
Rebeiro's take on the government's weak response: "I am not surprised. The government simply lacks the political will to take action. They fear that action against the Sena will create a law & order problem. They need the MNS to counter the Sena, and they will not take action against Rane who is a minister in this government."

The court will hear the case again next month. And it's unlikely to be appeased by the government's defence: that it has already recovered 57,000 rupees from MNS activists for causing damage at Mumbai University.