Government Trying To Protect Accused Who Shot Dead 10 In UP: Congress

Congress spokesperson Randeep Surjewala accused Yogi Adityanath of "lying" that the previous Congress governments were responsible for the dispute that triggered Wednesday's violence in Sonbhadra. 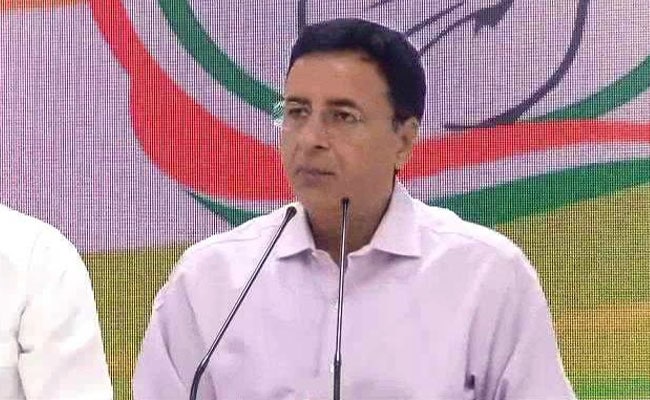 Randeep Surjewala also hit out at the Uttar Pradesh government in a series of tweets. (File photo)

The Congress alleged on Saturday that the Uttar Pradesh government was trying to protect the accused in the Sonbhadra clash and instead of ensuring justice, Chief Minister Yogi Adityanath was targeting party general secretary Priyanka Gandhi Vadra, who was detained on her way to meet the victims.

Questioning the reason behind Priyanka Gandhi's detention at a guesthouse in Mirzapur district in Uttar Pradesh, Congress's chief spokesperson Randeep Surjewala said the chief minister and the ruling Bharatiya Janata Party (BJP) were afraid of her, adding, "The reign of Ajay Bisht (Yogi Adityanath) continues to be the most insensitive in memory."

"Adityanath has made Uttar Pradesh 'Apradh Pradesh'. The timeline of different incidents clearly shows that the BJP-led UP government is trying to protect the accused in the Sonbhadra clash," he told reporters in New Delhi.

Mr Surjewala accused Mr Adityanath of "lying" that the previous Congress governments were responsible for the dispute that triggered Wednesday's violence in Sonbhadra.

The chief minister has blamed the previous Congress governments for the dispute, narrating how the piece of land over which the clash took place was bought and sold over the decades.

Promising justice in the incident, he has told the state Assembly that a sub-divisional magistrate and four policemen have been suspended and 29 people arrested.

Mr Surjewala mentioned various incidents since 2017 to allege that the Uttar Pradesh government was trying to protect the accused.

"In October 2017, Adityanath illegally grabbed a land of the tribals. In July 2018, the BJP government tried to give the land to accused Yagya Dutt and booked the tribals under various sections of the IPC. In October 2018, two more FIRs were registered against the tribals.

"On July 6 2019, the government gave a decision in favour of Dutt and the petition filed by the tribals was rejected so that their land could be grabbed. On July 17, the massacre took place," he said, adding that from the chain of events, it was clear that Mr Adityanath was trying to protect the accused in the case.

The Congress leader wondered why the Yogi Adityanath government and the BJP was so "scared" of her after she was detained.

On Friday, Priyanka Gandhi was detained and stopped from going to Sonbhadra, where 10 people were killed in a shootout on Wednesday, triggering a standoff between the Congress and the Uttar Pradesh government.

The Congress general secretary stayed put at a guesthouse in Mirzapur district, where she was taken after sat on the road with her supporters, insisting that she be allowed to proceed and meet the victims' families.

Twelve members of the affected families met her at the guesthouse in Chunar on Saturday.

Mr Surjewala also hit out at the Uttar Pradesh government in a series of tweets.

"This is what happens when BJP tries to 'befool all the people all the time'! UP Dy CM doesn't want Priyankaji to go to #Sonbhadra, DM, Mirzapur says Priyankaji is free to go anywhere! UP Police continues to detain her in Chunar Guest House! Jungle Raj," he said in one of the tweets.

The Congress leader said after "illegally detaining" Priyanka Gandhi for 48 hours, the BJP government does a "U-turn".

"Despite converting Sonbhadra into a police camp, victims walk 70 Kms to meet Priyankaji and narrate the horrific massacre. She assures to fight for justice!," Mr Surjewala said in another tweet.