The Defence Ministry today signed contracts to supply six Pinaka regiments, a system of rocket launchers, to the Indian Army at an approximate cost of Rs 2,580 crore by 2024. 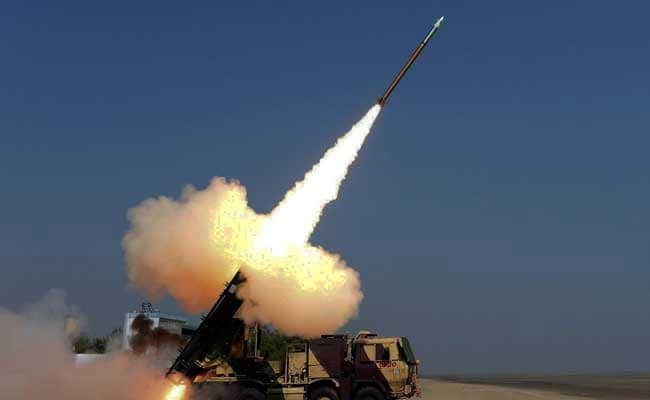 The Pinaka is a system of multi-barrel rocket launchers and reserves first used during the Kargil War.

In a boost to the government's initiative to make India's defence sector self-reliant, the Defence Ministry today signed contracts to supply six Pinaka regiments, a system of rocket launchers, to the Indian Army at an approximate cost of Rs 2,580 crore by 2024.

The contract with the Bharat Earth Movers Ltd, Tata Power Company Ltd and Larsen & Toubro calls for use of at least 70 per cent indigenous "content". It was approved by Defence Minister Rajnath Singh and Finance Minister Nirmala Sitharaman today.

The six Pinaka regiments will be operationalised along the country's Northern and Eastern borders, further enhancing the Army's preparedness in the region which has seen increased "provocative military movements to change the status quo" by Chinese troops.

The Pinaka is a DRDO designed and developed system of multi-barrel rocket launchers and reserves mounted on a vehicle. It was first used during the Kargil War, and has since been inducted into the Indian Army in large numbers. One Pinaka regiment consists of 18 systems.

As per the contract, the Tata and L&T will manufacture 114 launchers with automated gun aiming and positioning systems and 45 command posts, and the Bharat Earth Movers will provide 330 vehicles.

The pact comes within weeks of Minister Rajnath Singh saying necessary steps would be taken to make the country's defence sector self-reliant, or "atma nirbhar" - a call by Prime Minister Narendra Modi to check India's dependence on imports and push for local manufacturing as a way to not only tide over the economic impact of coronavirus, but also increase India's share in the global economy. He had then announced a ban on import of 101 defence items to boost indigenous production of weapon systems.

In June this year, PM Modi pushed the 'Make in India' initiative a step further with a call to become self-reliant after 20 Indian soldiers were killed in the line of duty in a violent face-off with Chinese troops in eastern Ladakh. The Galwan Valley clash - India's most aggressive with China since 1962 - left 45 Chinese soldiers dead.