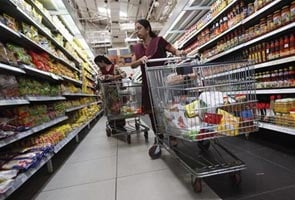 The slew of reforms comes a day after the government took the politically tough decision to hike the price of diesel by Rs 5 per litre and also capped the supply of subsidized liquefied petroleum gas (LPG) cylinders to six per household. Allies and Opposition parties alike have slammed it and demanded a rollback, but, faced with the threat of becoming the first in the BRICS (Brazil-Russia-India-China-South Africa) group of emerging economies to be downgraded to junk, the government now seems clear that economic imperatives outweigh political expediency.

So it has overridden huge opposition from allies like Mamata Banerjee and friendly parties like Mulayam Singh Yadav in deciding to move to open its retail sector to foreign supermarkets was a surprise one. This will allow global retail giants like WalMart to set up deep-discount stores in India. A sure-shot political storm follows. (Read: New, bold reforms announced by the Govt)

Importantly - and the government has underscored this provision - the policy allows state governments to decide whether to allow FDI in multi-brand retail or not. So, the government says, if some parties don't want the FDI, they can make that choice.  The Trinamool Congress, wants  the decision withdrawn. It has already said it will not implement it in West Bengal, which Mamata Banerjee rules.  (Read: Who said what)

Responding to whether his party will pull out of the government on this issue, Mr Ghosh said, "We do not have the numbers to dominate the government. If Trinamool congress withdraws now there will be an allegation that we are trying to destabilise the government. There will be horse-trading. Mamata Banerjee will not take a fraction of a second to withdraw support, but that will not stop this decision. She will take a final decision."

Multinational retailers like WalMart, Carrefour of France and Metro of Germany already have stores, but they are not allowed to sell to walk-in customers. They deal with smaller retailers, like the family-run shops in most localities. The government had last year cleared 51 per cent FDI in multi-brand retailers for cities with populations of more than a million. But it had to roll back that decision after huge protests led by allies of the UPA government and the opposition, broke out across the country.

The decision set off fears that multinational giants will put small retailers and local shops that service households will be wiped out. Those in favour of FDI say that this unlikely since local mom-and-pop shops give personalised services like home delivery that these huge deep-discount stores won't. They also say that most of these stores, because of their size will be far fewer that local establishments.

FDI in multi-brand retail has many pre-conditions, though. The minimum FDI limit has been set at $100 million. Half of any investment has to be made in infrastructure like cold-storage chains and warehouses. This is designed to help the agricultural sector and India has a severe shortage of these.

The most problematic condition, from the point of view of investors, will be that at least 30 per cent of the goods to be sold will have to sourced from local producers. Analysts say that MNCs might have a problem of quality control and supply.

FDI is single-brand retail was already permitted, but that too with several conditions, including 30 per cent local procurement. The government now says if companies don't want to procure 30 per cent locally, they will have to set up a manufacturing unit. Household goods giant IKEA of Sweden wants to invest more than Rs 10,000 crore to set up stores, but wants this rule to be relaxed. There is split within the government over this.

The government argues that FDI in multi-brand will give consumers the best deals possible on goods and also get it much-needed money.

It also says that farming sector will get a boost, since big retailers will not only source dircetly from them, cutting out middlemen, but also invest in cold-storages and other technology that India lacks. Those opposed to FDI in multi-brand retail say that it will be exactly the opposite: MNCs will control prices and squeeze the producers.

Promoted
Listen to the latest songs, only on JioSaavn.com
These MNCs are also expected to generate jobs in the areas where they set up stores as well as along the procurement chain. The government sees this as a big advantage.