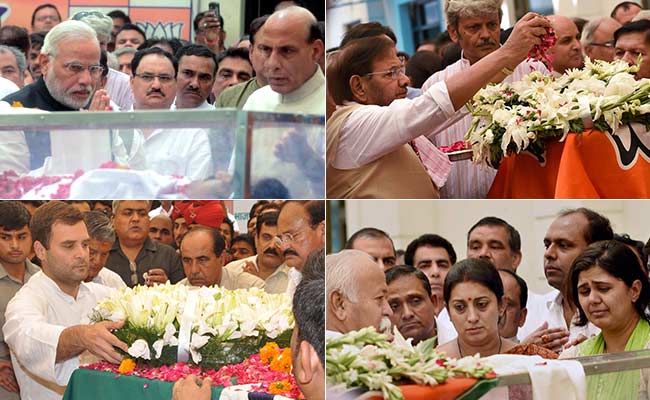 Prime Minister Narendra Modi and other BJP leaders paid their tributes to Gopinath Munde at the BJP headquarters.

"He suffered cervical fractures and the oxygen to his brain and lungs may have been cut off. His liver was ruptured and he lost one, two litres of blood," said union health minister Harsh Vardhan.

The 64 year old minister was on his way to the airport this morning to go to Beed, his Lok Sabha constituency, for a victory rally. He was sworn in as a Cabinet minister last week. ('Munde Wanted Water, Asked Driver to Take Him to Hospital')

Mr Munde's body was kept for about an hour at the BJP headquarters in Delhi, where leaders across party lines gathered to pay their tributes. Among them were Janata Dal - United leader Sharad Yadav, Biju Janata Dal's Jay Panda, Nationalist Congress Party's Sharad Pawar and his daughter Supriya Sule. (Munde's Demise a Major Loss for Nation and Government: PM Modi)

A wreath from former Prime Minister Atal Bihari Vajpayee was also laid at the feet of Mr Munde.

Mr Munde's body was be flown to Mumbai in the evening, where party workers will get a chance to pay their respects at the BJP headquarters in the city.

Tomorrow morning, his body will be taken to Latur and then to Parli in Beed district, Mr Munde's hometown, where the last rites will be performed.

Mr Munde was on his way to the Delhi airport this morning when an Indica car crashed into the minister's SX4 car at the Prithviraj Road and Aurobindo Chowk cross-section in the heart of the capital, the police said.

Promoted
Listen to the latest songs, only on JioSaavn.com
He was rushed to the trauma centre at the All India Institute of Medical Sciences, and was pronounced dead at 7.20 am.

The driver of the Indica,who was arrested and charged with causing death due to negligence and rash driving, has been granted bail by a Delhi court.