Dr Khorana became a naturalized citizen of the United States in 1966, and subsequently received the National Medal of Science. 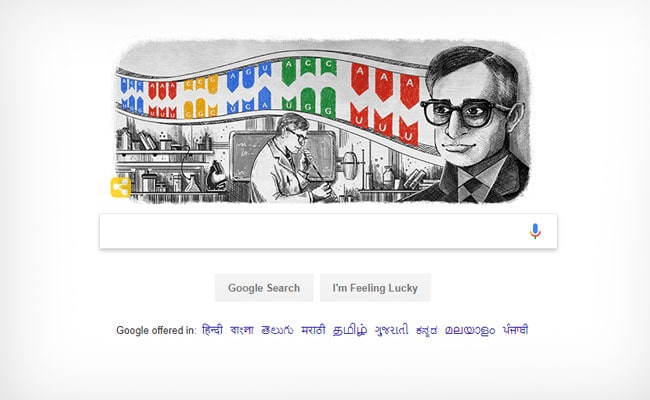 New Delhi: Har Gobind Khorana  was an Indian American biochemist who shared the 1968 Nobel Prize for Physiology or Medicine with Marshall W. Nirenberg and Robert W. Holley for research that showed how the order of nucleotides in nucleic acids, which carry the genetic code of the cell, control the cell's synthesis of proteins. Dr Khorana and Dr Nirenberg were also awarded the Louisa Gross Horwitz Prize from Columbia University in the same year. Today Google Doodle is honouring Dr Khorana on his 96th birth anniversary.

Born in Raipur, British India (now Kabirwala in Pakistan), he was the youngest of five children. He served on the faculty of the University of British Columbia from 1952-1960, where he initiated his Nobel Prize winning work. He became a naturalized citizen of the United States in 1966, and subsequently received the National Medal of Science.

Promoted
Listen to the latest songs, only on JioSaavn.com
In the 1950s, it was established that genetic information is transferred from DNA to RNA, to protein. One sequence of three nucleotides in DNA corresponds to a certain amino acid within a protein. How could this genetic code be cracked? After Marshall Nirenberg discovered the first piece of the puzzle, the remainder of the code was gradually revealed in the years that followed. Har Gobind Khorana made important contributions to this field by building different RNA chains with the help of enzymes. Using these enzymes, he was able to produce proteins. The amino acid sequences of these proteins then solved the rest of the puzzle.

Alumni of University of Liverpool, University of Cambridge and University of Punjab, he dedicated his life to education, science and research. Google fondly remembers and honours this genius on his birth anniversary.

"Education Is Wealth That Can't Be Stolen": MK Stalin At Madras University