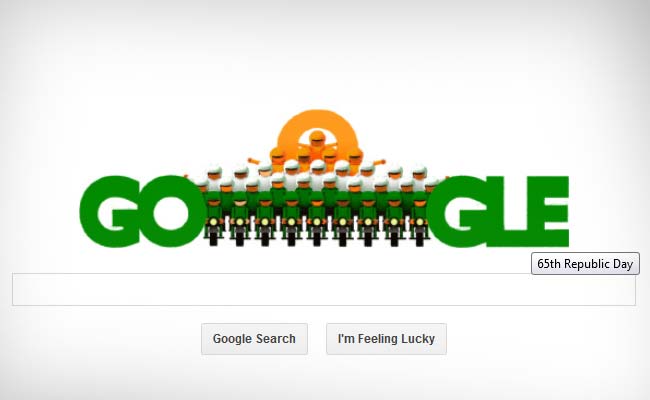 New Delhi: India's 65th Republic Day is being marked with a Google doodle today. Daredevil motorcyclists, representing a unit of the armed forces, are seen carrying the doodle which has been painted in the colours of the Indian national flag.

Unlike many of Google's previous doodles, today's doodle does not have any animation. It is, however, clickable and takes you to information and search results about the Republic Day.

A multi-layered security has been thrown around the national capital ahead of the Republic Day. SWAT teams of Delhi Police, anti-aircraft guns and sharpshooters of National Security Guard have deployed at various places while paramilitary and Delhi Police commandos will keep a close watch along the Republic Day parade route. Japanese Premier Shinzo Abe is the chief guest at the parade.

In other parts of the country too, there is tight security. In Punjab, Haryana and Chandigarh, vigil has been heightened at bus stands, railway stations, government building, dams and other places. An alert has been sounded in the two states with police and para-military personnel manning key places, officials said.

In Rajasthan, all guest houses and hotels have been asked to strictly check the identity of guests.

Promoted
Listen to the latest songs, only on JioSaavn.com
India's military power and might will be on display at today's Republic Day parade; the country's first indigenously designed and developed Light Combat Aircraft Tejas will be one of the biggest highlights.