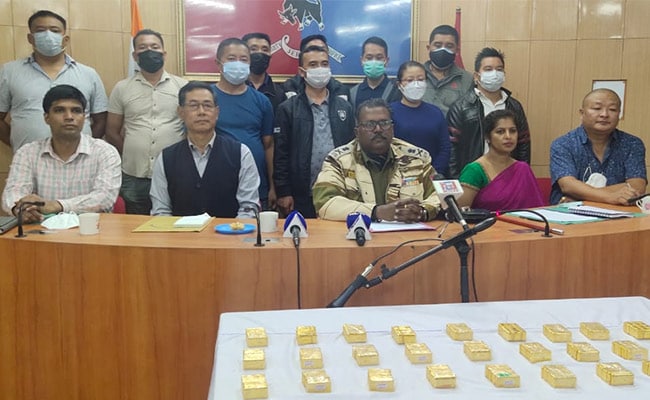 As many as 290 gold bars, weighing 48.14 kilograms, and a huge quantity of drugs worth around Rs 29 crore was seized by the Nagaland police on Monday. Nine people have been arrested, the police said.

Nagaland Additional Director General of Police (Administration) Sandeep M Tamgadge said the state police, while acting on a tip-off, seized the gold bars and drugs in separate actions on Saturday, Sunday and Monday at the narcotic check points at Khuzama in Kohima.

He said this seizure is the state's single biggest capture of the smuggled bullion.

According to Mr Tamgadge, the police intercepted a vehicle at the Kohima-Imphal National Highway on Sunday and recovered the smuggled gold hidden inside the vehicle's gear lever cover. Twenty-nine packets, each containing 10 gold bars, weighed 48.14 kg and are worth over Rs 22.78 crore.

Two accused -- Saurabh Singh, 35, and Pawan Kumar, 45 -- both residents of Uttar Pradesh, have been arrested.

At least 1.84 kg heroin packed in 88 soap cases and one kg opium packed in 12 packets were also recovered from the same spot, Mr Tamgadge said. The value of the drugs is around Rs 6.50 crore. Seven people have been arrested, he added.

Officials of the Assam Rifles and Border Security Force (BSF) said that drugs, especially methamphetamine, contain a mix of methamphetamine, caffeine and various other contraband, arms and ammunition were often smuggled from Myanmar, which shares 1,643 km of unfenced border with four northeastern states -- Mizoram, Arunachal Pradesh, Manipur and Nagaland.

Nagaland shares its border with Myanmar and most of the illegal things are smuggled through Nagaland-Myanmar route.

"We have launched a massive operation against drugs and smuggled goods and so far many arrest were done and huge quantity of contraband were seized by Nagaland police," a police source said.

On the other hand, Assam police have also launched a crackdown against drugs.