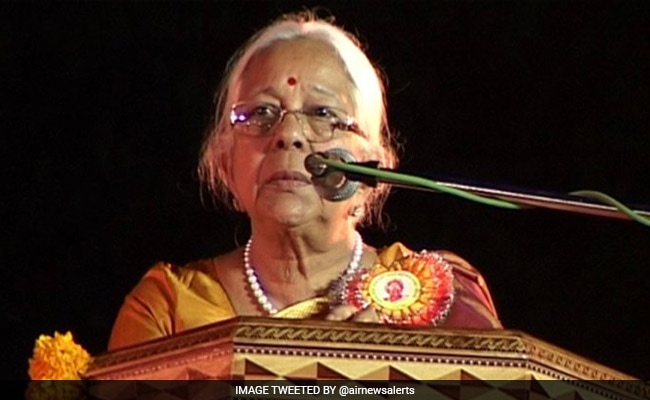 Shashikala Kakodkar was ailing for 6 months and was bed-ridden since the last one month.

The Goa government has announced two days state mourning, while all government offices were given holiday today.

Family sources said that she was ailing for six months and was bed-ridden since the last one month.

Following her father's death in 1973 while being still in office, she became chief minister and continued to be in power till being ousted by the split within Maharashtrawadi Gomantak Party in 1979.

Ms Kakodkar who was active in social and cultural fields also headed Bhartiya Bhasha Suraksha Manch (BBSM), a front demanding mother tongue be made medium of instruction in elementary education.

She is survived by three sons. The final rites would be performed on Saturday evening.

"We have lost the woman whose contribution in the development of the state was immense," he said.

The chief minister said though Ms Kakodkar was not active in politics, he always approached her for guidance.

"We are orphaned by the death of Shashikala Kakodkar. She has been a crusader of regional languages," Subhash Velingkar, convener of BBSM, said.

Promoted
Listen to the latest songs, only on JioSaavn.com
He said during her tenure as the chief minister, she worked to protect regional languages notwithstanding threat to her government.