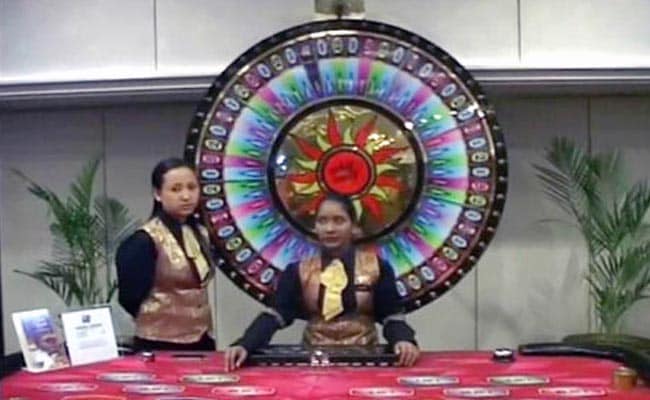 Goa Congress chief said he did not fear that closing down casinos would affect jobs in the state.

Panaji: The Congress has promised to ban all casinos in Goa if it is voted to power, including, its manifesto says, "floating casinos in Goa's river." State Congress chief Luizinho Faleiro said that in the first phase, casino boats that float in the Mandovi river would be shut down and in the second, onshore casinos would be targeted. The manifesto was released by former Congress Union Minister Jyotiraditya Scindia in Panaji today.

Mr Faleiro said he did not fear that closing down casinos would affect jobs in the tiny tourist state. "I don't think that there are many Goans working at these casinos," the Congress leader said.

Goa has six casino vessels and about a dozen onshore casinos that operate out of five star resorts. Together they contribute about 200 crore a year to the state revenue.

The Congress has earlier crossed swords with the state's ruling BJP over casinos which has asked why the party did not act against them when it was in power for two terms before the BJP returned.

The BJP had promised to shut down casinos when it was in the opposition and had floated that as a poll promise in 2012. After winning, however, it cited loss of revenue from a ban on mining for not closing casinos, but says that they "haven't allowed any new casinos to come up and have not renewed any contracts." All casinos, the BJP says, came up during Congress rule, but has been ambiguous on casinos in this election.

Arvind Kejriwal's Aam Aadmi Party, which makes its Goa debut, has taken a clear stance in its manifesto stating that it will shut down all casinos and will also provide alternative employment to close to 10,000 people employed by these.

All the parties peg their anti-casino stance on the "degeneration of Goan culture" that they allege these promote.

Goa votes on February 4 and after weeks of attempting an alliance with regional party Goa Forward, the Congress has announced that it will contest the assembly elections alone. It said on Saturday that it would contest 37 of the state's 40 seats.

Promoted
Listen to the latest songs, only on JioSaavn.com
In 2012, Goa threw out the Congress, with the party winning only seven seats. The BJP had won 21 of the 28 seats it had contested, a majority on its own. Then partner, the Maharashtrawadi Gomantak Party or MGP had won three seats.

The MGP parted ways with the BJP earlier month soon after elections were announced.