Pamod Sawant was handed the reins of the state within hours of the funeral of Manohar Parrikar, the state's tallest leader 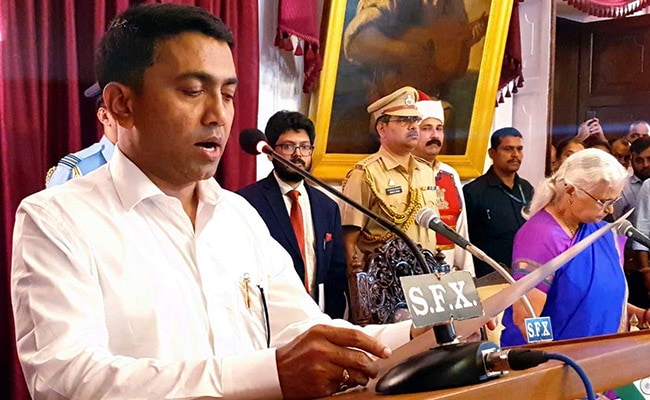 The BJP government led by Pramod Sawant in Goa - which took oath at a post-midnight ceremony today -- will face floor test in the assembly tomorrow. It has to prove majority in the face of Congress claims that it does not have the numbers necessary to rule.

Mr Sawant, who was handed the reins of the state within hours of the funeral of Manohar Parrikar, the state's tallest leader, reminded people that the state is in mourning. "I request all the people to not congratulate me or welcome me with flowers during the 7-day mourning period," he said.

Mr Sawant's oath took place at a hastily convened ceremony at the Raj Bhavan after more than 24 hours of grueling negotiations between the BJP, and its allies.

The Maharashtrawadi Gomantak Party (MGP) and the Goa Forward Party, which came on board after the assembly elections of 2017, said they did so only for Manohar Parrikar and with his death, all bets were off. Both parties refused to accept Mr Sawant as the Chief Minister.

Late in the evening, after BJP chief Amit Shah stepped in, the situation was resolved. Sudin Dhavalikar of the MGP and Vijay Sardesai of the Goa Forward Party were made Mr Sawant's deputies. Before that, both leaders were holding out for the post of the Chief Minister.

The switch by the two MGP lawmakers pushes the number of the BJP and its allies to 20 in the 40-member assembly, ending Congress's claim of being the single largest party.

Four seats were left vacant after the death of two BJP members -- including Manohar Parrikar -- and the resignation of two Congress lawmakers.

"Best wishes to Dr. Pramod Sawant and his team as they begin their journey towards fulfilling the dreams of the people of Goa. I am sure they will build on the work done in the last few years and boost Goa's growth trajectory," he posted.