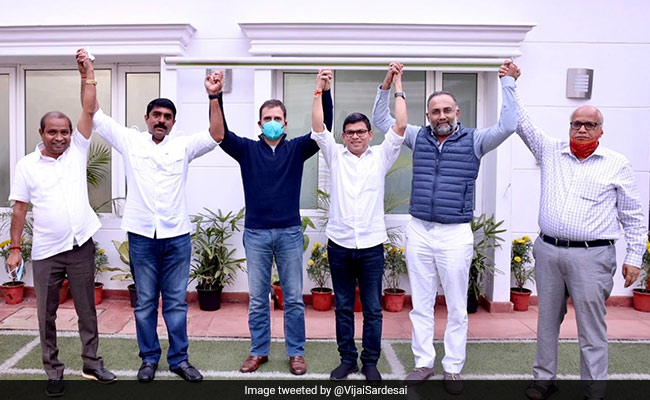 The Congress's alliance in Goa with a former BJP ally ahead of polls next year has drawn a trenchant attack from a leader of the Trinamool Congress, which had pursued the party for a collaboration.

Come on Goa- you're better than this!

Elections to Goa's 40-seat assembly are due in February.

Once a crucial ally of the BJP-led National Democratic Alliance (NDA), the Goa Forward Party had an acrimonious parting with the BJP in April and was courted by many players seeking to make inroads into Goa, including the Trinamool Congress.

Mr Sardesai was among the several leaders Trinamool Congress Chief and Bengal Chief Minister Mamata Banerjee met during her visit to Goa in October. Ms Banerjee had said then that to avoid the division of anti-BJP votes, regional and local parties must work together. Mr Sardesai, however, appeared unconvinced about the Trinamool's request for a merger instead of alliance.

In the end, the Goa Forward Party chief appears to have gone with the Congress.

A photo shared on Tuesday of Congress leader Rahul Gandhi with Vijay Sardesai and other leaders, their hands linked in a victory pose, confirmed the alliance.

The picture, apparently taken at Rahul Gandhi's Delhi home, was shared by the Congress party's official handle and many party leaders who called it a "game changer" in the Goa election.

Mr Sardesai also shared the photo in a tweet saying he was "proud" to be working on the "second liberation of Goa".

"Proud to be working for the 2nd liberation of Goa with the great grandson of the person who enabled the 1st! The curse of the communal and anti-Goan Pramod Sawant government will be blown away," he wrote.

Continuance of Goa under @BJP4Goa rule is an impossibility! Met with Shri @RahulGandhi. Proud to be working for the 2nd liberation of #Goa with the great grandson of the person who enabled the 1st! The curse of the communal and anti-Goan @DrPramodPSawant govt will be blown away! pic.twitter.com/ZR4wPHetSs

The Goa Forward Party was a part of former Chief Minister Manohar Parrikar's BJP government. After Mr Parrikar's death in 2019, three ministers from the party were dropped by new Chief Minister Pramod Sawant, after which it pulled out.

In April, the Goa Forward Party walked out of the NDA citing "anti Goan policies" of the BJP-led state government.