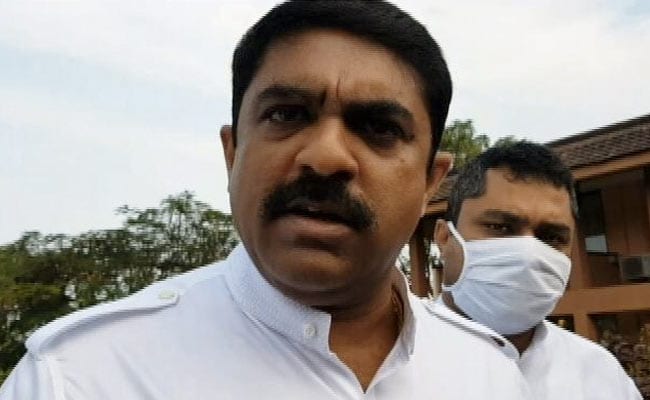 Bengal Chief Minister Mamata Banerjee on Saturday met Goa Forward Party chief Vijay Sardesai - who was, till April, an ally of the ruling BJP - to discuss an alliance ahead of elections next year.

The Trinamool chief is on a three-day visit to campaign for her party and explore opportunities with the GFP. Ms Banerjee said the two parties had spoken about "working together to fight against the BJP" but stressed "it is their (the Goa party's) decision".

"We discussed the matter... let's work together to fight against the BJP. So, it is their decision (now). We want to avoid division of votes," she told reporters after the meeting.

Ms Banerjee underlined that point - calling on local and regional parties to join hands to remove the BJP from power both at the centre and in various states.

"Regional and local parties can work together and give a good fight to the BJP," she said.

Mr Sardesai, on his part, called Mamata Banerjee "a symbol of regional pride".

"We are also a regional party. We welcome her recent statement that like-minded parties should come together to fight against the BJP. I met with her today and we will discuss that in our party," he said.

Before the meeting with Ms Banerjee, he had said that opposition unity would be critical to bring down the "corrupt and communal regime of the BJP", according to news agency ANI.

However, after the party he also dismissed talk of a merger over an alliance, saying that the former would compromise his party's ideologies.

"It is not like an acquisition. This will be against public sentiment. People will think a merger is a compromise (of the Goa party's ideals). Elections are a battle of perceptions and this - a merger with the Trinamool - will mean we will lose the battle before it begins," he told NDTV.

Vjiay Sardesai's GFP has three MLAs in the 40-member Goa Assembly and is viewed as a key player in state politics. He previously served as Deputy Chief Minister in the last BJP government.

Mamata Banerjee is in Goa as her party seeks to establish itself in other states after fortifying its position in Bengal in the April-May election, which she won with ease.

The Goa Forward Party earlier approached the Congress for a possible tie-up but was rebuffed, prompting Mr Sardesai to open talks with the Trinamool.

The Congress' decision not to ally with the GFP led to a sharp swipe from Ms Banerjee, who warned the GOP its failure to work with regional parties was only helping the BJP remain in power.

In the 2017 election the Congress won 17 seats and the BJP 13. But the BJP allied with regional parties, including the Goa Forward Party, to form the government, initially under Manohar Parrikar.