General Bipin Rawat stated that while there was a need to be alert on both the borders, primary front for the defence forces at the moment was the Northern border where India and China have been locked in a military standoff since last year. 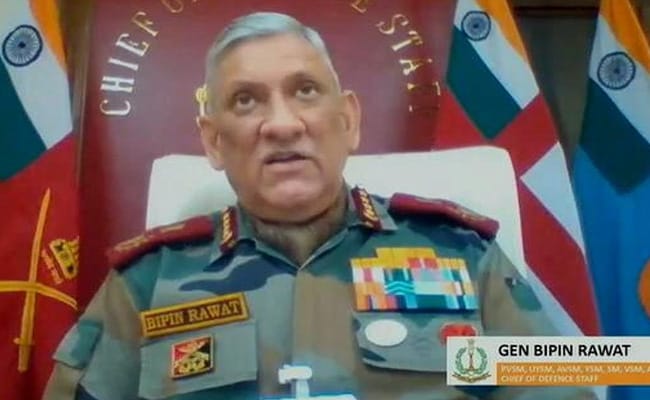 Asking armed forces to be on guard along borders with both China and Pakistan, Chief of Defence Staff General Bipin Rawat has said that terrorists working with the Pakistan Army can go rogue and it could escalate the situation with India.

Speaking to ANI on Tuesday, the Chief of Defence Staff also stated that while there was a need to be alert on both the borders, the primary front for the defence forces at the moment was the Northern border where India and China have been locked in a military standoff since last year.

"I would say both the fronts are a priority for us. While we have to prepared at the northern fronts especially after the situation that evolved in 2020, We can't lower our guard but on the western front."

"I have always maintained that there are terrorists who operate with the Pakistani armed forces, some of these terrorists can actually become loose cannon and create a situation which could lead to an escalation. So we have to be fully prepared on our western fronts also. So I would say that we should be prepared for both the fronts but our primary front remains the northern front," Gen Rawat said when asked who is the main adversary for the Indian defence forces between China and Pakistan.

Asked about the deployment of two-strike corps on the China front in last one year, he said this was about reorientation of the forces which have been getting dual tasks for several years now and they were not new raisings.

On Pakistan's support for terror activities inside India, the CDS said while the ceasefire is holding along Line of Control (LoC) so far, the internal peace process is being disrupted by infiltration of weapons and drugs, using drones.

Gen Rawat said if the internal peace process is disrupted by the smuggling of drugs and weapons, then "we can't really say that the ceasefire is holding".

"Ceasefire so far along the LoC is holding, which is a positive sign. At the same time, we are also witnessing infiltration of weapons and ammunition, using drones. It doesn't augur well for peace as these drugs and weapons are meant to disrupt the internal peace process," he said.

"If the internal peace process is disrupted, then we can't really say that the ceasefire is holding. The ceasefire doesn't mean that you ceasefire along borders, but you at the same time create trouble in the hinterland. We would like a semblance of peace in the entire Jammu and Kashmir," the CDS added.

Speaking on theaterisation of forces, General Rawat said that the process is going on well and it is making satisfactory progress.

"Amongst the three services, we have been able to resolve most of the issues. There is a better understanding that if the three services integrate, they can bring about jointness and carry out transformation. Then I think, we will ensure better efficiency and utilisation of our existing services. I think we'll be better prepared for combat in the future," he said.

Shedding light on the internal situation in Jammu and Kashmir, the CDS said he is "very confident" that the people of the Union Territory want peace.

"They have seen a lot of terrorism and insurgency over the years. People are now looking at peace returning, especially after the abrogation of Article 370. If this continues, the time will come when people themselves will shun violence and will not allow insurgency in the Valley because insurgency and terrorism can't survive without the support of locals," General Rawat said.

He further said that Army needs to identify the youth in the Valley who have been misled and guide them away from terrorism.

"Some of the youth who have been misled, I think we need to identify them and see how best we can converse with them and explain to them that terrorism is not the way forward, but peace and tranquillity is the way forward," CDS Rawat added.