A $10.5 billion pact to buy the Indian operations of Holcim Ltd capped a run of some 32 acquisitions for Gautam Adani the past year, according to data compiled by Bloomberg News.

Gautam Adani is a first-generation entrepreneur whose net worth currently sits at $102 billion. (File)

Billionaire Gautam Adani became the richest person in Asia this year. Now, a vast empire-building exercise is making him one of the region's busiest dealmakers.

A $10.5 billion pact announced Sunday to buy the Indian operations of Swiss building-materials firm Holcim Ltd., capped a run of some 32 acquisitions for Mr Adani the past year, valued at about $17 billion, according to data compiled by Bloomberg News.

The tycoon's conglomerate, the Adani Group, didn't disclose the transaction value in many of the smaller deals, implying the total amount could be even larger. After years of focusing on coal and infrastructure-related plays, Mr Adani is branching out in line with his growing fortune, buying up a range of assets from a premium rice brand and travel portal to a green energy firm from Softbank Group Corp.

A first-generation entrepreneur whose net worth currently sits at $102 billion, according to Bloomberg's Billionaires Index, Mr Adani has rapidly diversified into new areas like data centers, digital services, cement and media. After acquiring one of the most controversial coal mining projects in Australia, Mr Adani is making a firm pivot toward sustainable energy longer term. 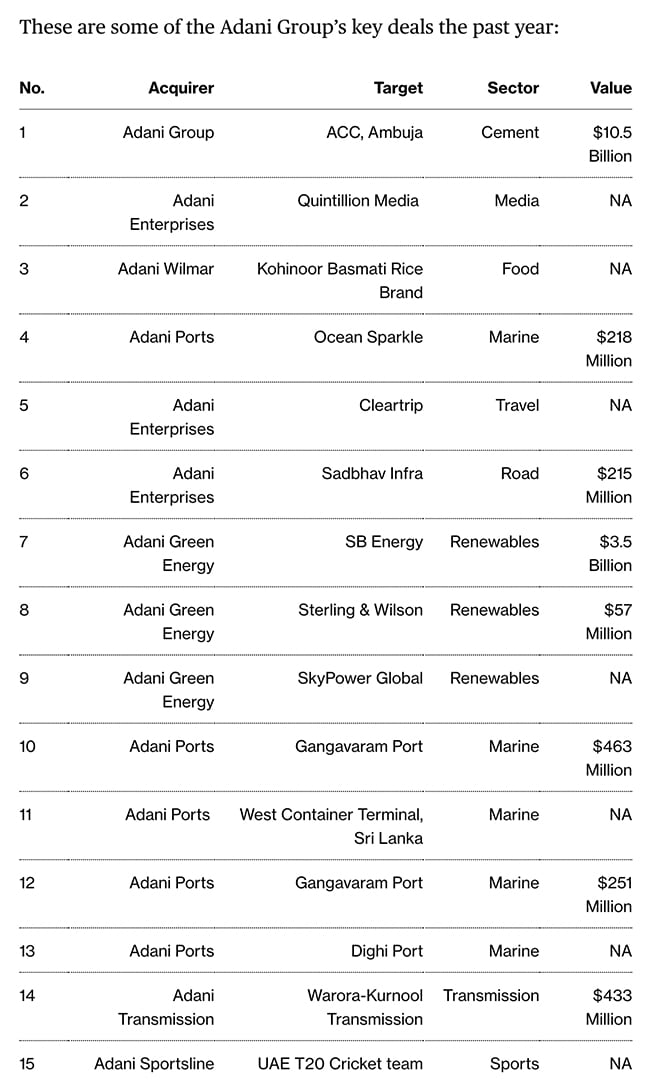 Mr Adani is "a sharp and ambitious tycoon who wants to have a finger in nearly every pie," said Arun Kejriwal, founder at KRIS, an investment advisory firm in Mumbai.

The 59-year-old businessman has now built the financial muscle needed to pull off a flurry of deals, Mr Kejriwal said. "He is capable of getting financial support from sovereign funds and can resort to leveraged buyouts."

The tycoon is also said to be scouting for targets among local media firms and is exploring partnerships with Saudi Aramco, Bloomberg reported earlier. A pact with South Korea's Posco was announced in January for a green steel mill.

"There is nothing slow about Adani," Mr Kejriwal said. "Everything is like a rapid fire."

Strategic Bridge At India-China Border In Arunachal Washed Away In Flash Flood: Report