The SIT submitted the 9,235-page charge sheet in the Principal Civil and Sessions court here Friday. 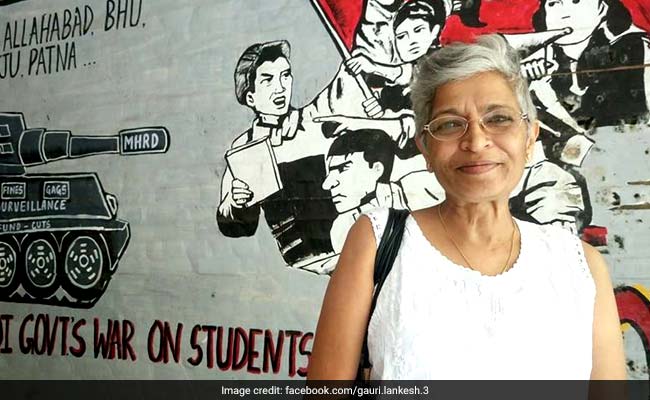 Gauri Lankesh, 55, was a vocal critic of right-wing hardliners.

In the 9,235-page charge sheet submitted before the Principal Civil and Sessions court here Friday evening, it was also stated that the killing of Lankesh was plotted for almost five years.

A network within the Goa-based Sanatan Sanstha targeted Lankesh for no personal reasons, it said.

"Sanatan Sanstha members' involvement is there. We have named them. We have also mentioned its allied organisation," a top officer in the SIT told PTI here Saturday.

Reacting to the charge sheet, Goa-based Sanatan Sanstha dismissed its alleged link with the killing of Lankesh, saying none of the accused were its members.

"None of the accused are members of the Sanatan Sanstha. So far, the SIT has not said this officially. If the SIT mentions our name in the supplementary charge sheet, we will fight it legally. So far, we haven't got the copy (of the charge sheet)," Chetan Rajhans, Sanstha's head of communication, told PTI over phone.

"Other than this, if any organisation indulges in maligning the name of the organisation without proof, it would face legal consequences," Rajhans said.

Deputy Chief Minister G Parameshwara, who holds the Home portfolio, Saturday said the government would soon take a call on banning organisations involved in the killing of Lankesh.

"No discussions have taken place regarding the organisations involved in the case, but we will shortly take a decision on that," Parameshwara told reporters.

He also refused to divulge information about the progress made in the investigation.

"The killer and the killed have no personal or any other enmity. Why she was killed? Because she believed in a certain ideology, she wrote and spoke on that. So it must be an ideology and it must be an organisation," Special Public Prosecutor S Balan told PTI.

The SIT has also sought permission to investigate the case further.

The first charge sheet in the sensational case was filed in May last, eight months after 55-year old Lankesh, known for her left-leaning and strong anti-Hindutva views, was shot dead in front of her house here on September 5 last year.

As the murder triggered national outrage and widespread condemnation, the Siddaramaiah-led government constituted the SIT to probe the killing.

The gang is also allegedly linked with the killing of three other rationalists M M Kalburgi, Narendra Dabholkar and Govind Pansare, the sources added.

110 Cartons Of Foreign Liquor Seized From 'Ambulance' In Madhya Pradesh