Chinese-made CM-302, which Pakistan will get, matches both the supersonic speed and the range of the Indian Navy's BrahMos anti-ship cruise missiles

Chinese designed CM-302 missile could be a regional game-changer

A game-changing Chinese anti-ship missile, capable of flying at three times the speed of sound, could erode a key missile advantage the Indian Navy has enjoyed over the Pakistani Navy since 2005.

An export variant of the YJ-12 missile, the CM-302, is likely to be the primary weapon on board four new Chinese frigates being built for the Pakistan Navy at the Hudong-Zhonghua shipyard in Shanghai.

The CM-302 matches both the supersonic speed and the range of the Indian Navy's BrahMos anti-ship cruise missiles, which have been deployed on several front-line frigates and destroyers of the Navy.

Senior defence officials monitoring the sale of new generation Chinese Type 054 frigates to Pakistan have told NDTV that the ships are likely to come armed with the CM-302, which they identify as a "new threat which represents a new capability."

But these officers also tell NDTV that "there is a long way to go for these missiles to become a credible threat for the Indian Navy" since the Pakistan Navy still lacks long-range sensors which need to target Indian platforms before a CM-302 can actually be fired.

"Possessing accurate targeting data, surveillance capability, and having the ability to penetrate a dense [Indian Navy] electronic counter-measures environment are a part of a complex matrix" that the Pakistan Navy's new frigates would need to overcome before they can attempt a missile launch. 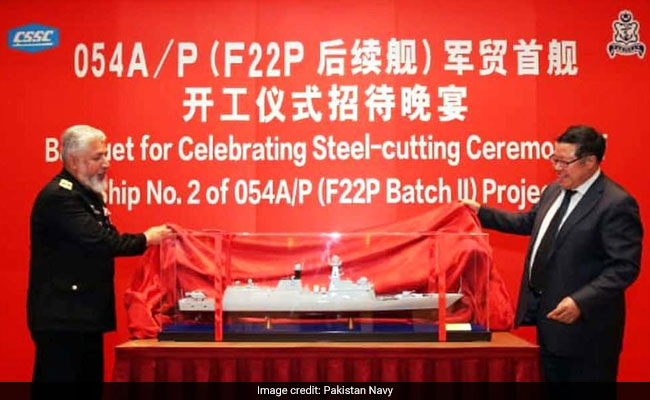 Still, the acquisition of the CM-302 onboard the new Chinese-built frigates that will be inducted from 2021 means a lethal new capability for the Pakistan Navy.

It is unclear if the Barak 8 Long Range Surface-to-Air Missile (LRSAM), deployed on India's newest Kolkata Class destroyers, have the ability to intercept a missile of this class. In response to a query from NDTV, senior Navy officers declined comment on whether the Barak 8 system has been test-fired against any supersonic anti-ship missile, let alone a missile that flies faster than Mach 2.

In an article in warontherocks.com, Robert Haddick, an independent contractor at the US Specials Operations Command, has said "the YJ-12 is the most dangerous anti-ship missile China has produced."

According to Mr Haddick, "the arrival of the YJ-12 is one more indication of how the US Navy is falling further behind in the missile competition against China, exposing flaws in operating concepts that US and allied commanders and policymakers have relied on for years."

News of the possible Pakistani acquisition of the YJ-12/CM-302 broke on twitter late last month when the China State Shipbuilding Corporation organised the steel-cutting ceremony for the second of the four Type 054A/P frigates that Pakistan is receiving. A digital image (shown below) emerged which showcased a CM-302 missile mounted on a launcher on a Pakistan Type 054 frigate. It is unclear if this detailed digital image was sourced from an official release or was the work of a Naval analyst. The likely Pakistani acquisition of the CM-302 missile comes amid reports that the government is considering the sale of the BrahMos missile to Indonesia. Co-developed with Russia, the BrahMoS can strike targets 400 kilometres away while travelling nearly at three times the speed of sound.