G20 leaders pledged to work with private sector to fight online propaganda and funding for terrorists and radicalisation. 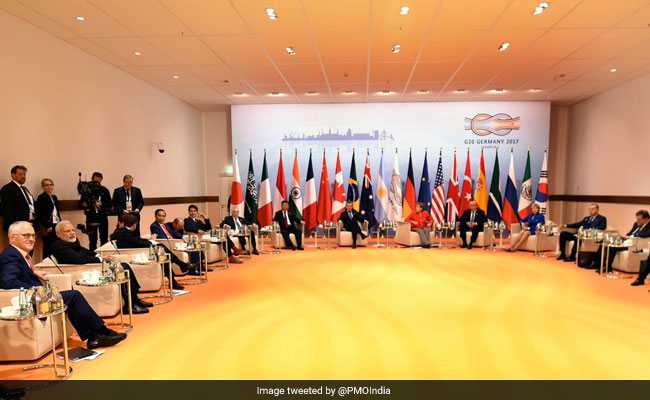 HAMBURG: Leaders of G-20 countries vowed to eliminate "safe spaces" for terror financing and called upon the private sector to join the fight by curbing internet misuse for terror propaganda. "Terrorism is a global scourge that must be fought and terrorist safe havens eliminated in every part of the world," said a 21-point declaration on countering terrorism issued at Friday's G20 meeting in Germany's port city of Hamburg.

"There should be no "safe spaces" for terrorist financing anywhere in the world," the statement said, pointing that weak implementation of existing standards allowed terrorists to get funds. It is a point that Prime Minister Narendra Modi had alluded to in his speech as well, noting that nations are less networked in dealing with the menace while the terrorists are better networked.

On PM Modi's radar were Pakistan-based terror groups such as the Lashkar-e-Taiba (LeT) and Jaish-e-Mohammad (JeM) and "some nations" - an oblique reference to Pakistan - that use terrorism for achieving political goals.

Asserting that the rule of law applies online as well as offline, the G20 leaders also focussed on working closely with the private sector particularly communication service providers. This was essential, the declaration said, "to fight exploitation of the internet and social media for terrorist purposes such as propaganda, funding and planning of terrorist acts, inciting terrorism, radicalising and recruiting to commit acts of terrorism.

But the G20 leaders also underscored that it was crucial to address the underlying conditions that terrorists exploit and called states to promote political and religious tolerance and inclusiveness.

The focus on terrorism at Hamburg comes against the backdrop of several terrorist attacks by small terror cells in Europe in recent months. Seven people were killed in a terrorist attack in the heart of the British capital last month. In May, a suicide bomber killed 22 people during an Ariana Grande concert in northern England's Manchester Arena and in April, a man driving a hijacked beer truck killed 4 people at a Stockholm department store.

Promoted
Listen to the latest songs, only on JioSaavn.com
The 21-point declaration called such "low cost attacks by small cells and individuals" funded by small amounts of an increasing challenge and asked private sector and regulators to strengthen efforts to identify and tackle terrorism financing.