The 29-year-old jawan of the 53 Rashtriya Rifles (24 Punjab) died while fighting terrorists in Pulwama area of Jammu and Kashmir. 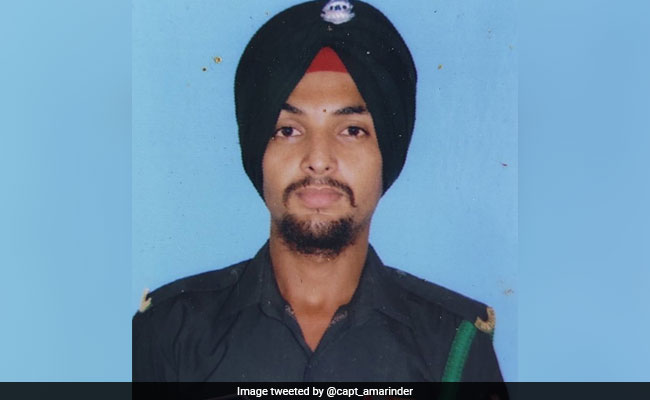 Rajwinder Singh was killed in an encounter with terrorists in Kashmir.

The funeral of soldier Rajwinder Singh, who was killed in an encounter with terrorists in Kashmir, was held today at his native village Dodra at Samana in Punjab's Patiala district with full military honours.

The 29-year-old jawan of the 53 Rashtriya Rifles (24 Punjab) died while fighting terrorists in Pulwama area of Jammu and Kashmir.

After his body arrived at his native place in Patiala, his mother Mohinder Kaur, father Avtar Singh and his elder brother Balwant Singh saluted him for the last time.

Slogans of "Shaheed Amar Rahe" and "Bharat Mata Ki Jai" rent the air as his body, wrapped in the Tricolour, reached his native village.

Villagers showered flower petals on the military vehicle as the body was being brought to his native place.

Local MLA Nirmal Singh, other political leaders along with officials from the Army, police and civil administration paid tributes to Rajwinder Singh.

The soldier was enrolled in the Punjab Regiment in 2011, and after completion of training, he joined the 24 Punjab, according to a statement.

Rajwinder Singh displayed exemplary valour by doing extremely well in Ghatak platoon, which has the most physically and mentally fit soldiers of the unit, the statement said.

He volunteered to be posted for counter-terrorist operations in 53 Rashtriya Rifles and was deployed posted in Jammu & Kashmir, it said.

The Punjab government had on Tuesday announced compensation of Rs 50 lakh, along with a government job to a family member of Rajwinder Singh.