From Cars To Bullet Trains, PM Modi Talks Ties With Japan Ahead Of G20 Summit

PM Modi, who is visiting Japan for the first time after his re-election, said people of India have trusted him once again and have bestowed upon him much more responsibility. 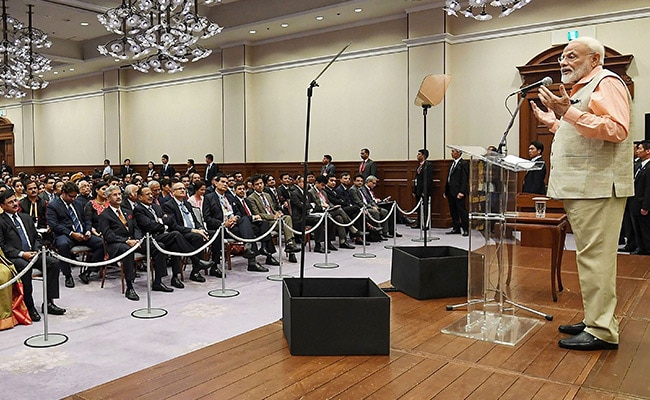 PM Modi said the relationship between India and Japan will grow stronger with Shinzo Abe.

Prime Minister Narendra Modi on Thursday said the ties between India and Japan will become stronger in ''New India'' as he thanked the Indian diaspora for being part of the world's largest democratic process, which saw the participation of 61 crore voters.

"When it comes to India's relationship with the world, Japan has an important place in it. This relationship is dated back to centuries. There is a sense of belonging, goodwill and respect for each other's culture and civilization," PM Modi, who is in Japan to attend the G20 Summit to be held in Osaka from Friday, said while addressing an enthusiastic Indian community at Kobe.

"Almost two decades ago, prime minister Atal Bihari Vajpayee and the then Japanese premiere Yoshiro Mori together made our relationship as a global partnership. After becoming Prime Minister in 2014, I got a chance to strengthen our friendship with my dear friend Prime Minister Shinzo Abe.

He also said the relationship will grow stronger with Mr Abe.

"Since 1958, Japanese companies are working in India. Today in India, from east to west and north to south there is no part where Japan's investment has not left a mark," he said.

PM Modi, who is visiting Japan for the first time after his re-election, said people of India have trusted him once again and have bestowed upon him much more responsibility.

"I'm fortunate to be here once again after 7 months. It's a coincidence that last time when I was here, election results were out here and you had shown trust in my dear friend Shinzo Abe. Today, when I'm here, the world's largest democracy has shown even greater trust in this ''Pradhan Sevak''," he said.

Thanking the Indian diaspora for playing a vital role in the recently concluded Lok Sabha elections, in which PM Modi was voted back to power with a stronger mandate, the prime minister said, "I am aware that many of you have also contributed in this electoral victory."

While several Indians from Japan came to India and worked on the field, many used social media like Twitter to spread the message of the democratic process, he said.

"For the first time since 1971, the country has given a pro-incumbency mandate to a government. This victory was the victory of truth and democracy," he said.

He noted that 61 crore voters, 10 lakh polling stations, over 40 lakh EVMs and more than 8,000 candidates took part in the world's largest democratic process.

The number of voters who participated in the Lok Sabha elections exceeded the population of almost all countries, barring China, he said.

"Government with majority is an advantage in foreign relations...The mandate (given to us) to fulfil the hopes and aspirations of new India will give a fillip to our relations with the world. The mantra of ''sabka saath, sabka vikas aur sabka vishwaas'' that we are following will help strengthen the world's trust on India," PM Modi said.

During his visit to Kobe, the prime minister also witnessed the exchange of Letter of Intent on Ahmedabad-Kobe Sister City Partnership.