In July, the Supreme Court had taken cognizance of reports quoting official data showing that pothole-related accidents claimed 3,597 lives in 2017. 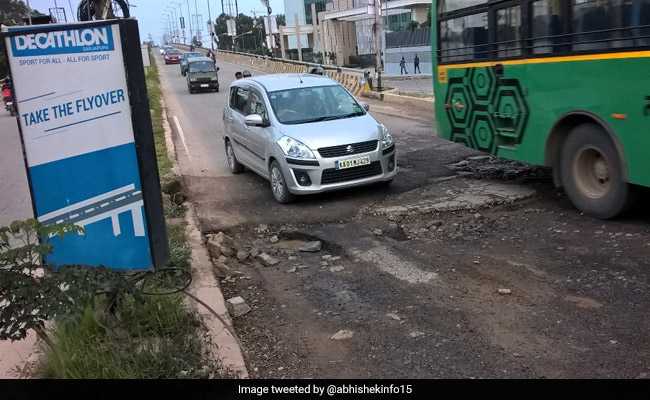 "What are the states doing," asked the Supreme Court on the number of pot-hole deaths in 2017. (File)

Taking note of almost 3,600 deaths reported in 2017 alone due to potholes on roads across the country, the Supreme Court today said it was "unfortunate" that some states were disputing the data published by the Centre on such accidental deaths.

A bench of Justices Madan B Lokur and Deepak Gupta expressed "surprise" that the states were disputing the data provided by them to the Union Ministry of Road Transport and Highway (MoRTH) on the ground that the figures were not verified by the transport departments of the respective states.

"We are surprised that state governments have disputed the data sent by them to the MoRTH," the bench said, adding "the views of the states are unfortunate".

The court noted in the order that it had earlier observed that the number of deaths in road accidents was more than the fatalities caused by terrorist attacks in India and the situation was "frightening".

In July, the Supreme Court had taken cognizance of reports quoting official data showing that pothole-related accidents had claimed 3,597 lives in 2017, compared to 803 in all terror and extremist attacks in the same year.

The bench said it was also surprising that some states have said at a recent meeting convened by the Supreme Court Committee on Road Safety, headed by former top court judge Justice KS Radhakrishnan, that the funds allocated to them for maintenance of roads were inadequate.

It observed that since the states were constructing the roads, they were also obliged to maintain them.

"What are the states doing," it asked the counsel appearing for the ministry, while referring to the submissions by the states at the meeting about the data on deaths in accidents caused by potholes.

Advocate Gaurav Agrawal, assisting the court as an amicus curiae in the road safety matter, said the authorities do not see the "underlining problem" and no policy was discussed at the meeting on how to repair the potholes.

"There was no input in the meeting as to how to address the issue of potholes," Mr Agrawal said, adding that the issue of "blind spots", where accidents usually occur, would also have to be considered.

Mr Agrawal, the amicus, said the aspect of compensation to be paid in case of deaths in road accidents was also under consideration of the government and it has been said that a lump sum compensation of Rs 5 lakh would be given in such cases.

"Does this (compensation) also apply to the deaths in pothole accidents?" the bench asked.

To this, the amicus said the issue of deaths due to potholes would be discussed.

During the hearing, the bench observed that the Supreme Court committee on road safety was doing a "good job" but the states were doing "nothing" in the matter.

It said that the meeting convened by the committee earlier this month was attended by representatives from the ministry, National Highways Authority of India and eight states.

The court granted time to the committee to submit a report on the issue of deaths caused due to potholes on roads and posted the matter for further hearing in the first week of November.

It said it expected the states to take up the matter with due seriousness and also consider the issue of compensation to be paid to the victims of accidents due to potholes on roads.

The Supreme Court had earlier too raised the issue of deaths in accidents due to potholes on roads, particularly in Mumbai. It had also said that according to reports, there were around 4,000 potholes in Mumbai.

"In Mumbai, people are dying due to potholes in roads and the officials are counting the potholes," the court had observed while hearing a matter relating to the sealing drive against unauthorised constructions in the national capital.