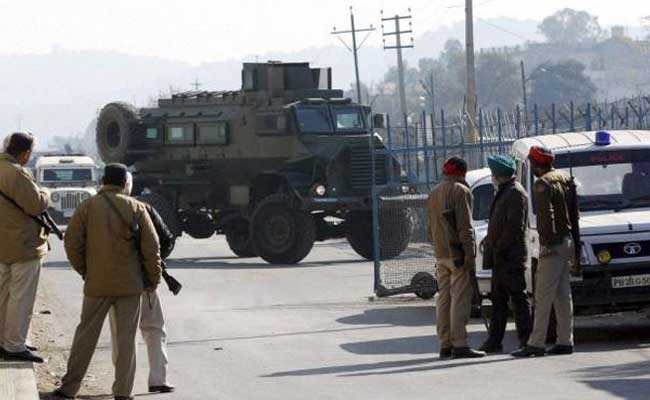 The Pathankot Airbase was attacked by terrorists on January 2, 2016.

Putting to end speculation about the number of terrorists involved in Pathankot attack, the government today made it clear that only four militants had entered the Air Force station to carry out the strike that left eight people dead.

The Congress MP had asked about the number of terrorists who entered Punjab for Pathankot attack and the route used by them as well as the details of terrorists killed and arrested along with the weapons recovered from them.

Mr Ahir said all these terrorists were neutralised by the security forces. The security forces recovered 4 AK rifles, 32 AK magazines, 3 pistols, 7 pistol magazines, one under barrel grenade launcher, 40 hand grenades and one dagger from them, he said.

The answer is contrary to a statement made by Home Minister Rajnath Singh on March 4 when he had said that charred remains, apart from four bodies of terrorists, were found at the debris after security forces searched the Pathankot Air Force station when the operation ended.

"Charred remains were found and sent for forensic examination. We are awaiting for reports," had said. There was speculation that the Home Minister had made this statement on a presentation made by the elite NSG, which was not corroborated either by defence personnel or central security agencies.

Defence Minister Manohar Parrikar, too, had said that six terrorists were involved in the attack.

The National Investigation Agency, which was probing the case, has been maintaining that the investigators had found only four bodies.

The Home Ministry has recently given NIA the sanction to file a charge sheet against Jaish-e-Mohammed chief Maulana Masood Azhar and three others in the Pathankot terror attack.

The Home Ministry has in the past been left red faced over answers to Parliament questions including another Pakistan related controversy where it informed the House that they do not know about whereabouts of terrorist Dawood Ibrahim, forcing the government to retract and clarify that Dawood is in Pakistan.