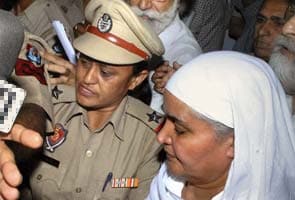 Kapurthala: Former Punjab minister Bibi Jagir Kaur was released from the jail in Kapurthala on Friday evening after she was granted bail by the Punjab and Haryana High court.

Hundreds of her supporters from Bholath, the constituency which she represents in the Assembly, gathered outside the jail to receive her.

Jagir Kaur's supporters garlanded her outside the jail and raised slogans in her favour. She and her family members along with her supporters left for her native village Begowal.

Promoted
Listen to the latest songs, only on JioSaavn.com
The former Shiromani Gurudwara Parbandhak Committee chief was sentenced to five years rigorous imprisonment by a CBI special court in March this year on the charges of criminal conspiracy and illegal confinement of her daughter Harpreet Kaur, who had died under mysterious circumstances. Harpeet also was allegedly forced to undergo an abortion.

Jagir Kaur, who had filed an application in the Punjab and Haryana High court seeking for her release from the jail, was granted bail on Thursday on the condition that she will not leave the country.
Comments
Bibi Jagir Kaur