Norway has a long history of conflict resolution and Kjell Magne Bondevik had played a key role in the resolution of the conflict with Tamil Tigers in Sri Lanka a few years ago. 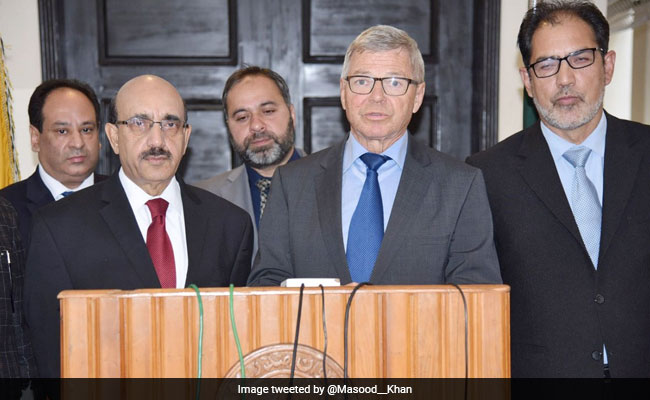 The visit of a former Norwegian Prime Minister to Kashmir Valley and his meetings with leaders of Hurriyat has triggered controversy. In a highly unusual step, Kjell Magne Bondevik - invited through the organization of Sri Sri Ravi Shankar -- met Hurriyat leaders Mirwaiz Umar Farooq and Syed Ali Shah Gilani last week. He is currently in Pakistan Occupied Kashmir and has met its "President" Masood Khan in Muzaffarabad.

Norway has a long history of conflict resolution and Mr Bondevik had played a key role in the resolution of the conflict with Tamil Tigers in Sri Lanka a few years ago.

India considers Kashmir a bilateral issue and for more than five years, the government has not allowed any foreign envoy to visit the Kashmir Valley or meet any separatist leader.

Mr Bondevik's visit on both sides of the Line of Control comes days after the go-ahead to the Kartarpur corridor, that will give Sikh pilgrims from India access to the Gurdwara Kartarpur Sahib in Pakistan. Sources in the foreign ministry and the Norwegian embassy have told NDTV they were not involved with Mr Bondevik's visit in any way.

On Monday, Omar Abdullah tweeted, "What are the Norwegians up to in Kashmir? Would either @SushmaSwaraj ji or Doval ji care to put the visit of the former Norwegian PM to both sides of the divided state in the correct context or do we have to rely on rumours & conjecture?"

On November 23, Mirwaiz Umar Farooq tweeted photos from the meeting, saying as Norway is known to play a "constructive role in conflict resolution across the globe", they have urged Mr Bondevik to help reach a resolution.

In a statement, Hurriyat said the Norwegian delegation had assured the separatist leaders that "they would use their good offices to ensure that a sustained and result-oriented dialogue between India and Pakistan" for an "amicable solution" on Kashmir, reported news agency Press Trust of India.