Former Chief Justice of India Ranjan Gogoi had headed the constitution bench that had delivered a landmark judgment in the temple-mosque dispute in Ayodhya. 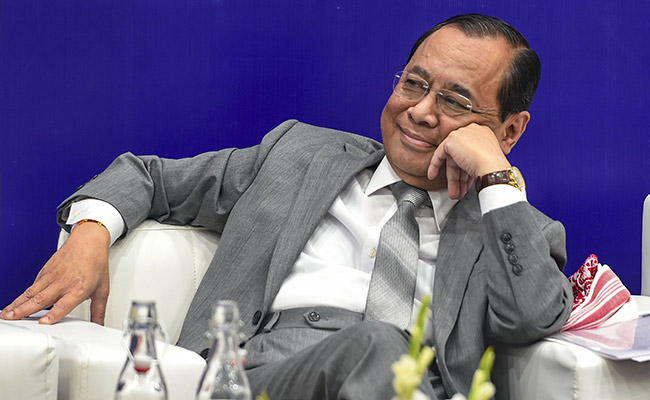 Former Chief Justice of India Ranjan Gogoi, who was nominated to the Rajya Sabha, the upper house of parliament, on Monday by President Ram Nath Kovind in an unprecedented move, said his presence in parliament will "be an opportunity to project the views of the judiciary before the legislative and vice versa".

"I will go to Delhi probably tomorrow. Let me first take oath, then I will speak in detail to the media why I accepted this...," Ranjan Gogoi told reporters in Assam's Guwahati on Tuesday.

"I have accepted it since I have a strong conviction that the legislative and the judiciary must at some point of time work together for nation-building. My presence in parliament will be an opportunity to project the views of the judiciary before the legislature and vice versa," he said.

Justice Gogoi had retired in November last year after presiding over the Supreme Court for around 13 months.

He was among the four sitting top court judges who had held a first-of-its-kind press conference in January 2018 when Dipak Misra was the Chief Justice. They had alleged selective "assignment of cases to preferred judges" and "sensitive cases were being allotted to junior judges" by Justice Dipak Misra.

No Chief Justice has been nominated before to the Upper House, usually dominated by celebrities and artistes, by the head of the state. And few members of the judiciary have crossed over to the space of legislature.

A couple of decades ago, former Chief Justice Ranganath Mishra had joined the Congress and became a Member of Parliament. Justice Mishra, who retired in 1991, was nominated to the Rajya Sabha in 1998 and stayed there till 2004.

Former Justice Baharul Islam was earlier a Rajya Sabha MP before nominated as Judge of the Gauhati High Court. He was appointed as judge of Supreme Court in 1980. He went on to absolve the then Bihar Chief Minister Jagannath Mishra in the urban cooperative bank scandal. He resigned as Judge and became Rajya Sabha member again.

As a judge, Ranjan Gogoi had headed the constitution bench that had delivered a landmark judgment in the temple-mosque dispute in Ayodhya. The court had handed the disputed 2.77-acre land for a temple and granted 5 acres for a mosque at an alternative location in Ayodhya.

He was also part of the bench that gave a clean chit to the government in the case regarding the acquisition of the Rafale jets, saying there was no occasion to doubt the decision-making process in the procurement of 36 fighter jets.

There were also allegations of sexual harassment against him by an employee of the court, but he was cleared by the three-member Supreme Court panel that was looking into the matter.

In his farewell speech, Justice Gogoi had spoken of the lawlessness taking over in "some pockets" of the legal system.