Bihar Election 2020: "HAM will no longer be a constituent of the grand alliance. The party has decided to leave the Mahagathbandhan," party spokesman Danish Rizwan told reporters. 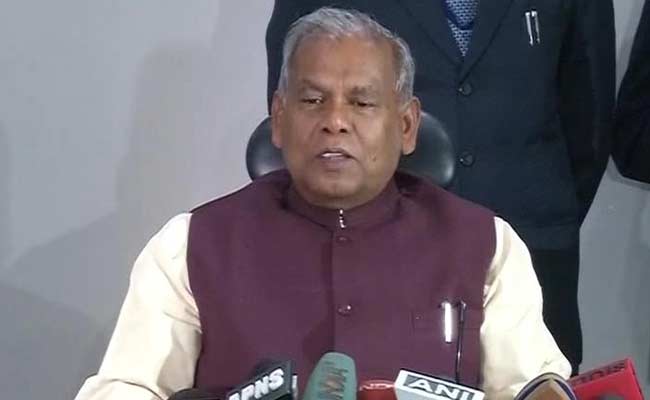 The Hindustani Awam Morcha (HAM) of former Bihar Chief Minister Jitan Ram Manjhi exited the opposition Grand Alliance on Thursday, dealing a blow to the opposition's bid to defeat the NDA led by Nitish Kumar's JD(U) in the state assembly elections due in October-November.

The Hindustani Awam Morcha's core committee authorised the Dalit leader to take a call on whether to merge with another party or coalition, or go to the hustings alone, a top party leader said.

"HAM will no longer be a constituent of the grand alliance. The party has decided to leave the Mahagathbandhan," party spokesman Danish Rizwan told reporters.

The decision to walk out of the five-party opposition coalition in Bihar was taken at the Hindustani Awam Morcha's core committee meeting at Mr Manjhi's residence in Patna, Mr Rizwan said.

Assambly elections are due in the state in October-November and the Election Commission has indicated it would go ahead with the electoral exercise notwithstanding concerns expressed by opposition parties that it could lead to further spread of COVID-19.

Though the party did not declare which coalition it will align with after walking out of the RJD-led Grand Alliance, close watchers of the evolving political scene in Bihar said Mr Manjhi could veer towards the JD(U)-led NDA once again.

Though no JD(U) frontline leader admitted as much on the record, many in the party feel Mr Manjhi could compensate for the loss of Shyam Rajak, the ruling party's Dalit face, who crossed over to the RJD, a few days ago.

Mr Rajak was a minister in the cabinets of RJD supremo Lalu Prasad, his wife Rabri Devi and Mr Kumar.

"The party has authorised its president to decide the future course of action," Mr Rizwan said, adding whatever decision he takes will be acceptable to all.

Holding the RJD responsible for the failure to form a coordination committee to iron out the differences within the alliance for better functioning, Mr Rizwan said, "Leaders who do not listen to the constituent partners, will they listen to the people after coming to power?"

The barb was apparently directed at Lalu Yadav's RJD, which has already declared his son Tejashwi Yadav as its Chief Ministerial candidate.

"Our leader Jitan Ram Manjhi has categorically stated that there is no point in continuing with the alliance which does not follow democratic norms and listen to its partners," Mr Rizwan said.

Even Congress leader Rahul Gandhi had said during a virtual meeting of his party in the state recently that a coordination committee will be formed within a week, but nothing happened, he added.

He said both Mr Kushwaha and Mr Sahni had backed the idea of a coordination committee but the RJD leadership paid no heed.

Mr Manjhi, a former Bihar Chief Minister, was appointed by Nitish Kumar as his successor after the JD(U)''\s dismal performance in the 2014 Lok Sabha polls, when it managed to win just two of the state's 40 seats. Nitish Kumar owned moral responsibility for the defeat and relinquished the top job, but a year later wanted Manjhi to vacate the post for him.

The party contested three Lok Sabha seats in the 2019 general elections as part of the Grand Alliance but was unable to make an impact.