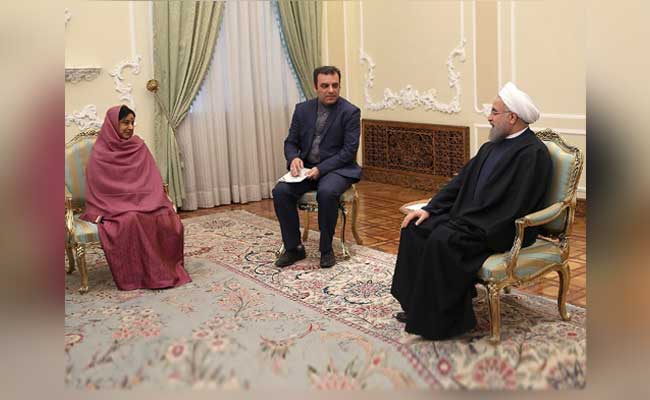 Images of Ms Swaraj in a pink sari and matching shawl at a meeting with Iranian President Hassan Rouhani have gone viral and fed a debate on whether she was right to cover her head.

Comments ranged from lacerating to mildly disapproving to supportive.

An uncharitable tweet said the minister "is wearing a pink potato sack", but it has since been deleted.

@TarekFatah@SushmaSwaraj yes. MEA is supposed to represent India and Indian culture. Will HE Iranian President wear Indian dress in India?

Many condemned the preoccupation with the minister's sartorial sense at a time important strategic moves were being made.

People bashing Sushma Swaraj for her 'Islamic dress' during Iran visit. And it is so unfair https://t.co/MLWMwoVwoy

In Iran, the law requires all women to cover up. Some women dignitaries have tried to resist it, though without success.

Reports say Italy's Emma Bonino, the EU Foreign minister, was forced to wear a headscarf in 2014 after she landed in Tehran. The Iranian Chief of Protocol reportedly came to the tarmac with three headscarves for her, which she first refused. She hastily grabbed one when Iran reportedly threatened to cancel her visit.

Australian foreign minister Julie Bishop also wore a headscarf in Iran a year ago. Some conservative media outlets still complained that she had not "completely complied with hijab requirements". Ms Bishop responded to the criticism saying: "This is our first visit to Iran in 12 years and I do not want to make it our last."
Comments
Sushma SwarajSushma Swaraj sariSushma Swaraj Iran visitHassan Rouhaniforeign ministerSushma Swaraj pink potato sack