"For Some People, Politics Is All About Themselves," Says Rahul Gandhi

"There are people for whom politics is all about themselves, their personal image and personal glorification," Congress president Rahul Gandhi said at a remembrance event of former Union Minister E Ahamed 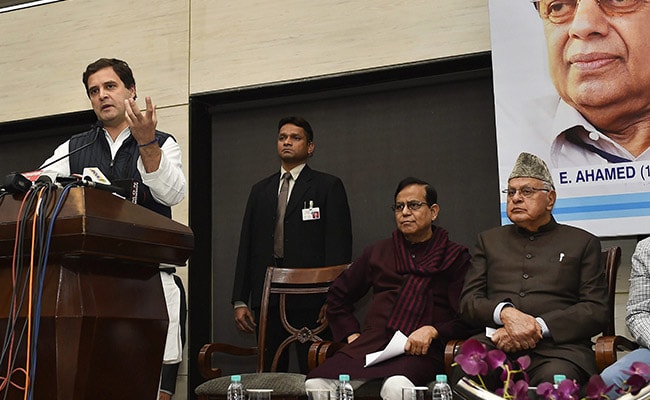 New Delhi: Congress president Rahul Gandhi on Monday said that politics for some is about self-glorification and not a means for others' welfare. "There are people for whom politics is all about themselves, their personal image and personal glorification," Rahul Gandhi said.

"And then there are people for whom politics is about others and others' welfare. I think the late E Ahamed Sahib belonged to the category of politicians for whom politics was all about others' good," Mr Gandhi said at an event held in remembrance of former Union Minister E Ahamed, who died a year ago after a heart attack in the Lok Sabha.

United Progressive Alliance (UPA) chairperson Sonia Gandhi was expected to attend the meeting but could not and sent a message instead that was read out by the organisers.

Rahul Gandhi recalled how he struck up a friendship with Mr Ahamed, an Indian Union Muslim League (IUML) leader from Kerala who used to sit behind him in the Lok Sabha, despite their huge age difference.

"I felt hurt when I saw at the hospital that his family was not being allowed to meet him during his last minutes. I thought it was unfair," the Congress chief said.

Mr Ahamed, who collapsed inside the Lok Sabha during the President's address to the joint sitting of both houses ahead of the Budget session last year, was rushed to Ram Manohar Lohia Hospital in Delhi. The next day, Finance Minister Arun Jaitley was scheduled to present the Budget.