Sushil Kumar Modi will campaign on Tuesday from Belhar, then go to Nathnagar and the next day he will be in Simri Bakhtiarpur. On all these three seats, the NDA candidate is from the JDU. 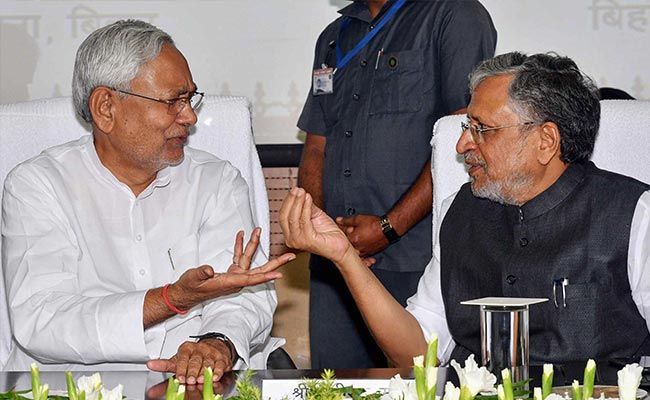 With just 10 days to go for byelections in Bihar, the state's ruling alliance of the Janata Dal United and the BJP has decided to put behind their sharp political differences and campaign together. Chief Minister Nitish Kumar will kick off the election campaign from Siwan's district's Daraundha with his deputy Sushil Kumar Modi by his side on Thursday.

According to the itinerary confirmed so far, Nitish Kumar and Sushil Modi will address three election rallies in Daraundha, Kishanganj and Samastipur. By-polls will be held in five assembly constituencies - Daraundha, Belhar, Nathnagar, Simri Bakhtiarpur and Kisanganj - and one parliamentary constituency Samastipur.

The Samastipur seat fell vacant after the death of Ramchandra Paswan earlier this year; his son Prince Raj is the NDA's candidate from here. In the remaining five Assembly seats, polling is taking place as the legislators who won the last time were elected to the Lok Sabha in the national elections in May.

Sushil Kumar Modi will campaign on Tuesday from Belhar, then go to Nathnagar and the next day he will be in Simri Bakhtiarpur. On all these three seats, the NDA candidate is from the JDU. The BJP has just one candidate in Kishanganj.

Since Nitish Kumar formed the government with the BJP in 2017, both leaders had always had a joint election meeting for every bypoll. However, this year due to their differences and bickering, Mr Modi and Mr Kumar have realized that unless they have joint meetings the confusion among cadres would not end.

The tension within the state's ruling alliance became evident on Tuesday as leaders of the BJP stayed away from a Dussehra function at Patna's Gandhi Maidan. Presence of political leaders across party lines in key social functions is traditional. But for the climactic Ravan Vadh of the Ram Leela held during Navratras, only the Chief Minister, the Speaker of the Bihar Assembly, Vijay Choudhari and Bihar Congress President Madan Mohan Jha were present for the function that was organised by a private committee.

It was the presence of all the invited BJP leaders in town that made it appear like a deliberate political move. Governor Phagu Chauhan, Deputy Chief Minister Sushil Modi, BJP legislators and Patna Mayor Sita Sahu were all present in the city, sources said.

A section of the BJP -- led by Union Minister Giriraj Singh -- has been at loggerheads with Nitish Kumar over the waterlogging in Patna since last month's unprecedented deluge. Sources in the party had indicated that the faction hopes to dislodge Nitish Kumar as the face of the NDA in the state.