For 2019, BJP Will Bet Bigger Than Ever On Narendra Modi: Foreign Media

The 2019 election has suddenly opened up following the BJP's loss of three large Indian states on Tuesday, a day after Reserve Bank of India Governor Urjit Patel shocked investors by quitting. 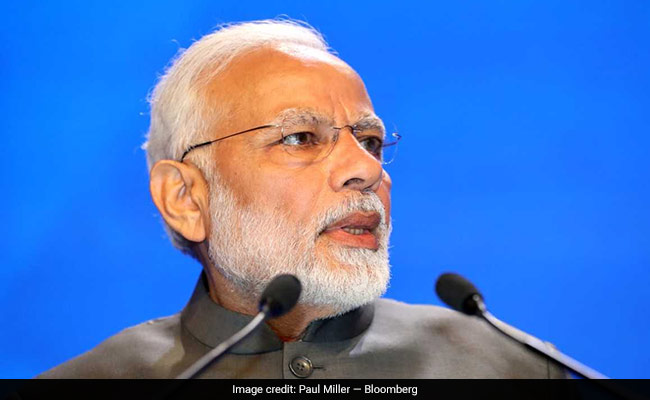 Rocked by regional election defeats and investor dismay at the surprise loss of the central bank chief, India's ruling party is doubling down on Prime Minister Narendra Modi.

Four-and-a-half years after crushing the Nehru-Gandhi dynasty's latest scion as he swept to victory, PM Modi still cultivates his image as a diligent, incorruptible son-of-a-tea-seller who strives to make India a prouder, more powerful country.

That enduring appeal is the Bharatiya Janata Party's trump card going into national elections next year in the world's biggest democracy. BJP leaders expect to triumph by focusing the campaign on PM Modi versus opposition leader Rahul Gandhi and by zeroing in on religious issues-including a controversial temple-that will consolidate India's majority Hindu voters, said a senior BJP official who asked not to be named discussing strategy.

The 2019 election has suddenly opened up following the BJP's loss of three large Indian states on Tuesday, a day after Reserve Bank of India Governor Urjit Patel shocked investors by quitting. The Hindu nationalist party's senior leaders plan to regroup to chew over the poor performance, with the party bracing for the loss next year of a significant number of seats in the lower house of parliament, or Lok Sabha, the BJP official said. 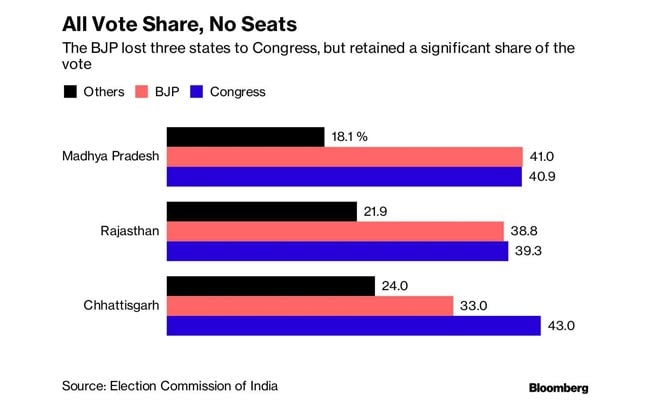 "We will undertake a serious review and introspection as we always do after every election," BJP upper house lawmaker and party spokesman G.V.L. Narasimha Rao said in an interview. "Unlike in the rest of the country, the BJP fought in these elections under the leadership of our experienced chief ministers. The results will be highly favorable in the Lok Sabha polls as the focus will then be on Prime Minister Narendra Modi."

That bet on PM Modi is still likely to pay off, despite the party's loss of Madhya Pradesh, Rajasthan and Chhattisgarh to the opposition Congress Party. With growing discontent among farmers and concerns about job growth cited as significant factors in the defeats, the BJP is blaming local leaders and arguing that PM Modi is insulated from the loss of support.

"The BJP remains the party to beat in 2019," said Milan Vaishnav, South Asia program director at the Carnegie Endowment for International Peace. "In states where the BJP can turn the fight into a presidential contest, it still has a leg-up with Modi."

India's ballot, involving an electorate of more than 875 million, will determine the fate of PM Modi's Hindu nationalist party and its agenda of reform mixed with polarizing religious rhetoric that often comes at the expense of the country's roughly 170 million Muslims. A populist who stormed to power some two years before Donald Trump took the White House, PM Modi has sought to project a muscular, more assertive vision of India as a global power.

The unexpected regional electoral losses were magnified for the BJP by market turmoil caused by the sudden resignation of the central bank chief the previous night. While PM Modi praised Mr Patel's tenure, the central banker's departure followed an acrimonious spat with a Modi administration desperate to tap into the Reserve Bank of India's capital reserves.

A re-energized opposition under Mr Gandhi, the Congress party president, means the national ballot due by May suddenly looks less certain. PM Modi has slipped in opinion polls as Mr Gandhi has gained, yet the prime minister remains India's most popular politician. One survey put PM Modi as the premier of choice for 34 percent of voters compared to 24 percent for Mr Gandhi. That popularity is likely to help him to a second term, even if he returns without his single-party majority and needs to lean on coalition allies.

Part of PM Modi's allure lies in his humble roots in a provincial town in Gujarat. After ruling for nearly 13 years as the chief minister of the industrialized, fast-growing western state, PM Modi's bid for national office turned on his ability to tap into a deep-seated desire throughout India for economic development and a pledge to clamp down on corruption.

Over the course of his term in New Delhi, PM Modi's government has been bold, if not reckless. They introduced a national goods and services tax, eliminated 86 percent of the country's currency overnight-in a bid to unearth hidden wealth-and launched a campaign to improve India's score on the World Bank's ease of doing business ranking. At the outset, PM Modi enjoyed almost-unquestioning support, expanding the party's power over a record 20 out of the country's 29 state legislatures.

But recently, his golden touch has started to desert him. PM Modi's brash approach to banning cash and a confusing new tax structure that bewildered business owners dented India's growth. A thin electoral victory in southern Karnataka, home to the IT hub formerly called Bangalore, was overturned by a Congress alliance with a regional party. More recently, there have been enormous farmer protests in India's biggest cities demanding the government guarantee crop prices and waive their debts.

With job creation flagging, his party's overt reliance on Hindu nationalist flash points has blown up in its face. So-called cow vigilantes in the most populous state of Uttar Pradesh, which the BJP rules through a Hindu priest they appointed chief minister, recently formed a mob to protest the death of some cattle and ended up shooting and killing a police officer.

Party leaders believe his personal popularity remains intact despite this week's losses. Mr Rao, the BJP lawmaker, pointed to the near identical vote share for his party and the Congress Party in Rajasthan and Madhya Pradesh as proof that defeat wasn't indicative of a broader anti- PM Modi sentiment. Rather, unpopular local politicians bear the blame, he said.

Addressing the tremendous anger in rural India that led to the BJP losses will be a huge challenge, said one senior minister who asked not to be named discussing internal matters. The BJP is seen as a party that talks a lot but fails to deliver real change on the ground, the person added.

"People are angry with us," said heavy industries minister Anant Geete from the Shiv Sena party, an ally of the BJP.

For the opposition Congress, this week's victories show that a focus on farmer distress, unemployment and "a general sense of stagnation in the economy" resonates with Indian voters, according to senior party leader and former finance minster, Palaniappan Chidambaram. He doesn't buy the BJP's focus on a presidential-style campaign.