First Images Of India's "Bahubali" Rocket That Will Launch Chandrayaan-2

India's most ambitious space mission yet, Chandrayaan-2, which aims to place a robotic rover on the moon, will be launched on July 15 at 2:51 am.

The Indian space agency carried out a full dress rehearsal of the launch .

The first images of India's heaviest rocket, referred to as "Baahubali", have been released by the ISRO just days before it ferries India's Chandrayaan-2 into space.

India's most ambitious space mission yet, Chandrayaan-2, which aims to place a robotic rover on the moon, will be launched on July 15 at 2:51 am. President Ram Nath Kovind will be at Sriharikota to witness the midnight launch.

In the first pictures that have been released by the ISRO, the Geosynchronous Satellite Launch Vehicle Mark III (GSLV Mk 3) or "Bahubali" can be seen majestically standing on the launch pad. The 640 tonne rocket is as high as a 15 storey building and it will loft the 3.8 tonne satellite on its journey to the moon. This will be the third launch of India's heaviest launcher.

India attempts to soft land a rover called Pragyaan on the lunar surface in the first week of September which will place India's flag on the lunar surface. Chandrayaan-2 is India's second foray to the moon. Landings in thin atmosphere and low gravity of the moon are very tricky. The 27-kilogram six-wheeled rover will explore the South Pole of the moon. This is a robotic mission and will carry no human beings to the moon surface.

Last week, the first images of Chandrayaan-2 satellite were released. 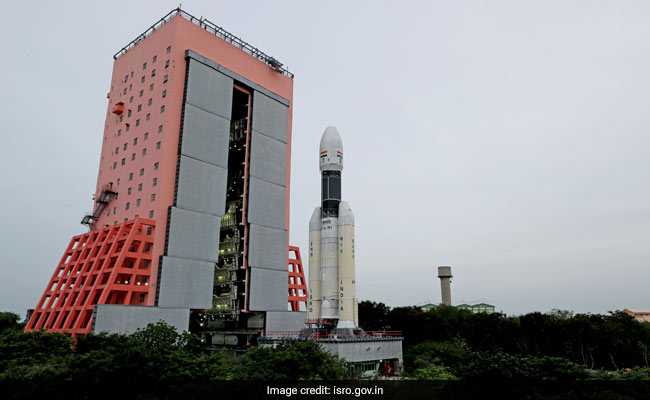 GSLV MarkIII-M1 vehicle coming out of the Vehicle Assembly Building.

If India succeeds in soft landing on the moon, it will become the fourth country to do so after the US, Russia and China. Earlier this year, Israel failed in its maiden attempt to soft land on the moon through Beresheet spacecraft, which crashed after reaching very close to the moon surface.

The Indian space agency carried out a full dress rehearsal of the launch .

India launched its first moon mission, Chandrayaan-1, in 2008. It was an orbiter where India was the captain and there were several global players like USA, Britain, Bulgaria and the European Space Agency. It cost Rs. 450 crore and was launched using India's workhorse rocket, the Polar Satellite Launch Vehicle (PSLV) in 2008.