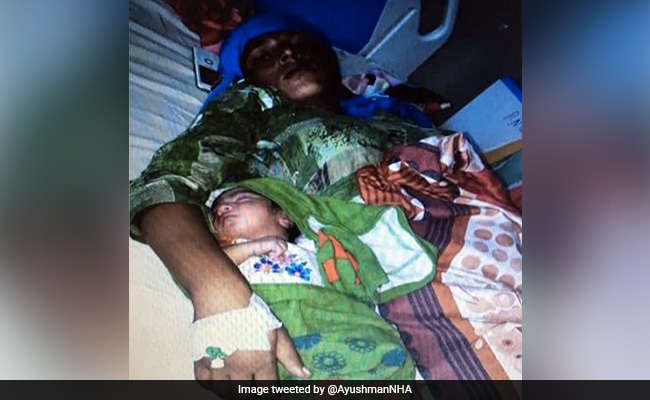 Praising the scheme, Mausami, who received a benefit of Rs 9,000 said, "The government will bear all medical expenses. This scheme is very good."

"Heartening to see the first claim raised and paid under the Ayushman Bharat scheme, for the cesarean delivery of baby girl in Haryana," Chief Minister Manohar Lal Khattar said in a tweet on September 1.

Heartening to see 1st claim raised and paid today under @AyushmanNHA for the caesarean delivery of baby girl in #Haryana. #AyushmanBharathttps://t.co/Q2OjGvWeR3

Ayushman Bharat, popularly called 'Modicare', was announced by the government earlier this year during the Budget Session of Parliament. The ambitious healthcare programme promises to cover over 10 crore poor and vulnerable families, based on the database of Socio-Economic Caste Census. Under the programme, underprivileged families will get up to Rs 5 lakh per family for hospitalisation.

The beneficiaries will be allowed to take cashless medical facilities from any empanelled public or private hospitals across the country. The Khattar government rolled out the scheme in Haryana on the same day PM Modi announced Pradhan Mantri Jan Arogya Yojana, on August 15.

The government in a statement claimed that as many as 29 states and union territories have signed up for implementing the Ayushman Bharat scheme but Delhi and Odisha have said they will implement their own state health programmes. While Odisha Chief Minister Naveen Patnaik announced the Biju Swasthya Kalyan Yojana in Bhubaneswar on August 15, Delhi Chief Minister Arvind Kejriwal questioned why tag the Prime Minister's name with the scheme. Mr Kejriwal wants it to be named 'Mukhya Mantri Aam Aadmi Swasthya Bima Yojana-Ayushman Bharat' for Delhi.

"Ayushman Bharat is an insurance based model. Government says it will pay the premium. Is that the right model for India? I don't think so. The right model for India is the one practiced in Europe - vast expansion of public facilities, more public hospitals, more super specialities...more beds and free public health care. That's the way you can treat our 130 crore people," former finance minister P Chidambaram told news agency ANI, adding that "Insurance model has been a complete failure anywhere in the world. Even in America, Obama Care - an insurance model, has been seriously questioned."

The centre has allocated Rs 10, 000 crore for the ambitious healthcare programme.