"Why This Drama?" Says Man Charged For Taking Pet Husky To Kedarnath

The man has defended his action on Instagram, saying that the dog Nawab has been visiting temples all across India for the past four years. 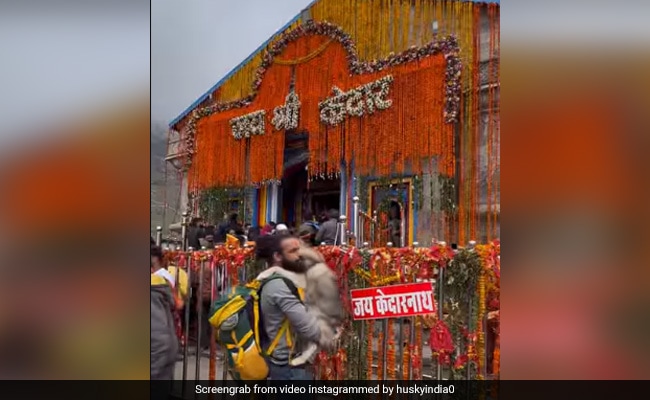 Noida man with his dog at the Kedarnath temple.

A First Information Report (FIR) has been filed against a Noida resident who took his pet dog to the holy Kedarnath shrine. The video of the man, a blogger, is going viral on social media platforms.

Identified as Vikash Tyagi in the videos, the Noida resident took his pet husky named Nawab to the holy shrine during the ongoing Char Dham Yatra, according to reports.

One of the videos show the 33-year-old grabbing the front paws of the dog and making it touch the statue of 'Nandi' in the outer precincts of the Kedarnath temple. A priest is also seen putting a tilak (vermillon put on the forehead) on the pet dog.

After the videos went viral, the Badrinath-Kedarnath temple committee on Wednesday demanded stern action against the devotee, saying these visuals have hurt the religious sentiments of people, reported news agency PTI.

An FIR lodged by the committee's CEO at the behest of its president Ajendra Ajay, the PTI report further said.

But the man has defended his action on Instagram handle huskyindia0, which he runs. Mr Tyagi said Nawab has been visiting temples all across India for the past four years "so why this drama now?"

“People click photos even if they visit a swimming pool. We reached the temple after trekking for 20 kilometres, so the there is nothing wrong in making a video,” he said in one of his posts.

“A dog went to Tapovan with Yudhishthir,” a user commented. “We all are with you Nawab,” said another.