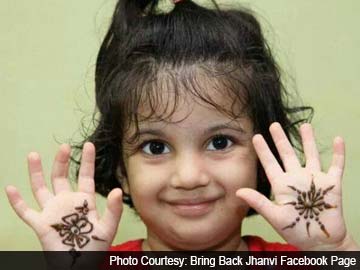 Jhanvi Ahuja's family had opted for paid campaigns on Facebook and Whatsapp.

New Delhi: The story of lost-and-found toddler Jhanvi Ahuja is being touted as a major success story for the social media: using it as a tool to fight crime. And the scale of the campaign became apparent when Jhanvi's family appeared on NDTV's show Agenda.

Three-year-old Jhanvi had gone missing from India Gate on September 28 while on an outing with her family. On October 5, she was found in Janakpuri, her head shaved and a placard carrying her name around her neck. (Read: Three-Year-Old Girl Missing From India Gate Found With Head Shaved)

Explaining how the 'Bring back Jhanvi' campaign was organised, Tarun Grover, her mother's brother, said, "We are 10 siblings and we divided up the work". One handled the political aspect - "visiting the Home Minister or anyone who could help us. One coordinated with the police and so on".

Between the family and the police, they followed every lead.

At one point, the police warned them against such an aggressive campaign, he said. "We got a group to hold a candlelight vigil at Jantar Mantar, and Tyagiji told me not to hype it so much."

"Tyagiji" is Additional Commissioner of Police SBS Tyagi, who explained this to Agenda. "I did warn them, because you never know, the abductors could have hurt the child."

Now the focus is on finding the perpetrators, but Mr Grover points out it may not be easy. The CCTV footage from India Gate is very poor quality.

The police are probing why no ransom demand was made. "It could have been a childless couple. Her head was shaved to conceal her identity, but she was well cared for. I think once the news got viral, they got scared and released her," said Mr Tyagi.

But the police are also exploring the possibility of the child being kidnapped by an organised gang for human trafficking or begging.

Promoted
Listen to the latest songs, only on JioSaavn.com
Jhanvi hasn't said much so far. She refers to her abductors as Mummy and Papa and says they shaved her head.