Tulsi Gabbard, the first Hindu lawmaker in the US Congress, said security and counter terrorism are critical areas of the partnership between the US and India. 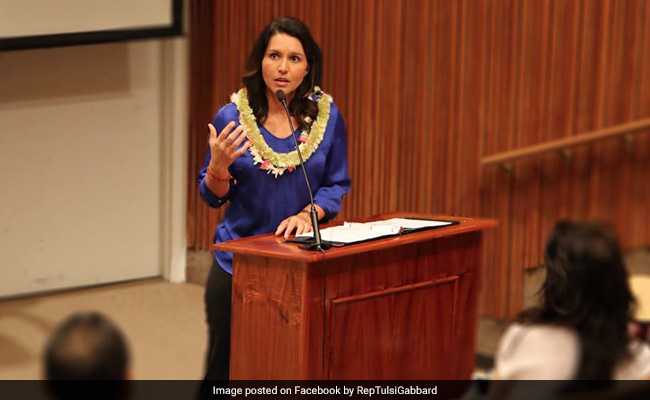 New York: India's partnership with the US will be strengthened further if the two countries deal with the "unconventional" counter-terrorism threats together, US Congresswoman Tulsi Gabbard has said.

Ms Gabbard, the first Hindu lawmaker in the US Congress, said security and counter terrorism are critical areas of the partnership between the US and India.

The number of military-to-military engagement and exercises between the two nations exceed any other partner in the region and is only continuing to grow.

She was addressing the FICCI-IIFA Global Business Forum organised in New York yesterday in partnership with the Asia Society Policy Institute.

"From the top all the way to the Pacific Commander, there is a recognition of the benefit to continuing to strengthen this partnership, continuing to engage in ways that haven't been before to ensure that the two countries are stable and that we are dealing with this unconventional counter-terrorism threat together because if we do that together we are stronger," she said at the forum with the theme of 'India and the United States: Partners in Progress'.

Indian Ambassador to the US Navtej Sarna said the need for the US and India to cooperate both bilaterally and in other global foras as well as in the UN is extremely important.

Congresswoman Gabbard, co-chair of the Congressional Caucus on India and Indian-Americans, said there is still "quite a lot of excitement" in Washington and a feeling of momentum around the visit by Prime Minister Narendra Modi to the American capital for his first bilateral meeting with President Donald Trump.

"Those of us on the US-India caucus feel it and believe it and those who have been working on the partnership over the years are saying over and over again this is the most exciting time in the friendship between our two countries" she said, speaking not only about the political front but also in areas of economic ties, technology, education, culture and arts.

She noted that the IIFA awards being organised in New York shows how much interest America as a whole has in films coming from India.

"We at the US-India caucus are excited about the opportunities that exist that are mutually beneficial for both of us," she added.

Ms Gabbard said there had been concerns over uncertainties and possible obstacles in the India-US relations under the Donald Trump administration.

"What we have seen come forward before, during and after Modi's visit was that while heads of state can meet and have these important diplomatic talks and negotiations, the heart and backbone of the relationship exists not only at the government level but also in the private sector, businesses and research facilities that are not waiting for marching orders from anyone in government," she said.

Addressing the valedictory session, Mr Sarna said it is important to underline that the support for the India-US engagement is clearly bipartisan and across the political spectrum.

He termed the visit by PM Modi as "landmark", saying the two leaders "hit it off" in terms of understanding, engaging each other and listening to each other's concerns.

"There was convergence on strategic and defence issues, economic cooperation for the global good, cyber security and space," he said.

Ms Gabbard added that the joint statement released at the end of the bilateral visit was "impressive and extensive" in covering the different sectors and areas, laying down the pathway forward for the two countries.

She stressed that the US can also benefit and learn as India deals with different challenges and opportunities. Noting that India has a large worker base, she said job training is needed for that.

"If we can look at some of the innovative ways of how some of the companies are providing that training we can use that in some of our communities where jobs have either been replaced by technology or whose industries have been shut down or shipped off to other countries," she said.

"As we are looking at new opportunities here whether it is in the middle part of the country or inner cities, we can see how countries like India are taking the best of technology and are able to empower people in their communities," she said.

Mr Sarna added that he does not see contradiction in PM Modi's focus on 'Make in India' and Donald Trump's call to 'Make America Great Again'.