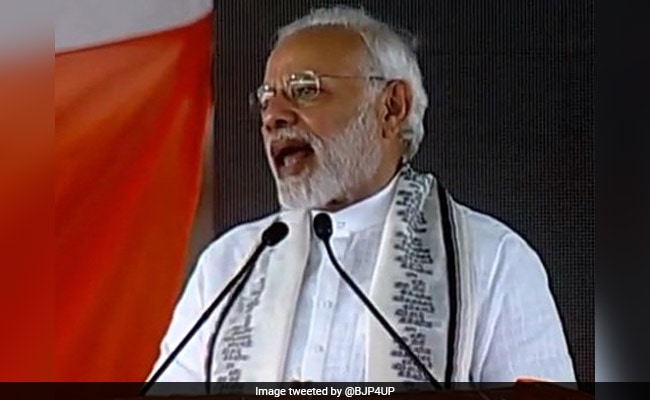 Prime Minister Narendra Modi slammed opposition parties today, saying some parties want "unrest" by creating doubts in the minds of the people for "political gains" but were cut off from ground reality.

Addressing a public rally at the 'nirvan sthal' of Sant Kabir Das after laying a 'chadar' at the mazar of the poet, the Prime Minister also said that those who imposed Emergency and those opposed to it, have now come together.

"Some parties don't want peace and development. They (Opposition parties) think if there will be unrest, they will benefit politically...but these people are cut off from roots and don't know the nature of this nation of Sant Kabir, Mahatma Gandhi and Baba Ambedkar," he said.

Taking a swipe at the Samajwadi Party and the Bahujan Samaj Party, the Prime Minister said, "Those who always talk of 'samajwad' and 'bahujan' are extremely selfish. They don't see the welfare of society but only the welfare of themselves and their families".

PM Modi also took a dig at former UP Chief Minister Akhilesh Yadav over the bungalow controversy, saying some leaders are only concerned about government bungalows.

"They were more concerned about their bungalow and not about housing for the poor," he said and added that the Akhilesh Yadav government failed to send the number of the poor in UP to avail benefits under the Prime Minister's housing scheme.

The Prime Minister also lashed out at opposition parties for creating "hindrance" in passage of the Triple Talaq bill in Parliament even though Muslim women have been demanding it.

Recalling Babasaheb Ambedkar's contribution, he said though he advocated for equality in society, unfortunately there are parties that are using his ideals for political gains.