Fear of flying kept me from Goa, writes Uma Bharti 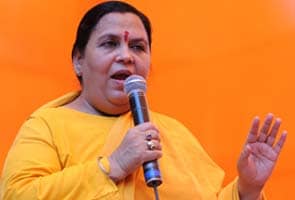 Bhopal: Senior BJP leader Uma Bharti, who like some of her other prominent colleagues has given the ongoing party conclave in Goa a miss, has justified her absence as a result of a "fear of flying".

The party's two-day national executive in Goa has made headlines for all the wrong reasons with a section of its leaders, led by veteran LK Advani, staying away, reportedly in protest against the likely appointment of Gujarat Chief Minister Narendra Modi as the head of the BJP's poll panel. Ms Bharti - known to be close to Mr Advani - is part of the group, having forwarded ill health as her reason to not attend the meet.

But, in a letter addressed to BJP President Rajnath Singh today, the 54-year-old Ms Bharti sought to dismiss all speculation of her being part of a camp war within the BJP, blaming the media instead for dragging her into the controversy. She also said that she would have flown in to Goa with Mr Singh but for her ill-health which forced her to cancel the trip. (Track live updates of BJP's national executive meet in Goa)

Ms Bharti also said that she firmly backed the party president. "Whatever decision you take in Goa has my prior support," she said. The remarks are significant in that it hints at a no-objection from Ms Bharti - a known Advani loyalist - towards the possible elevation of Mr Modi as the head of the BJP's election committee, which many believe could mean his eventual projection as the face of the party for 2014.

That is a likelihood that Mr Advani is firmly opposed to. The 85-year-old contends that Mr Modi's promotion would do the party more harm than good at this stage - with questions on Mr Modi's "secular" credentials overriding all other issues within the party and outside it.