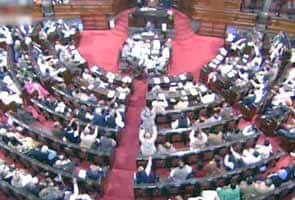 New Delhi: The government has now secured Parliament approval for its controversial decision to allow foreign direct investment or FDI in multi-brand retail, winning the vote in the Rajya Sabha too. In the Upper House, as in the Lok Sabha, it was helped by Mayawati and Mulayam Singh Yadav.

Rajya Sabha chairman Hamid Ansari read out at 3.15 pm on Friday that, subject to correction, 123 MPs had voted for FDI and 109 had voted against the government's policy decision.

As promised, the nine MPs of the Samajwadi Party walked out ahead of the the vote and Mayawati's 15 BSP MPs voted in favour of FDI, ensuring a victory margin bigger than expected. All nominated MPs except Sachin Tendulkar were present in the House. The Congress-led UPA government, in a minority in the Rajya Sabha, scrambled to get its MPs to the Upper House and NCP member Janardhan Waghmare arrived to vote this morning in an ambulance straight from hospital.

Mr Waghmare and another MP Janardhan Reddy, who too is unwell, voted from outside the House. Prime Minister Dr Manmohan Singh, who is the Leader of the Rajya Sabha, reportedly phoned many of the ten nominated members of the House to consolidate their support. Yesterday, Parliamentary Affairs minister Kamal Nath met top Congress leaders to take stock of the government's numbers.

The end of the Rajya Sabha debate saw Commerce Minister spar with the BJP's Arun Jaitley on the Opposition's contention that the government went ahead with its decision to allow foreign supermarkets into India without consulting other political parties. The house had to be adjourned as Opposition MPs kept up their protests and Mr Sharma refused to yield.

Mr Sharma said he had spoken to 14 chief ministers and written to others, met heads of political parties and representatives of major farmers' unions in the country before going ahead with the big reform measure. "I wrote to Nitin Gadkari, why did he not discuss it with his party," said a combative Mr Sharma, when asked by Arun Jaitley why the BJP had not been consulted.

He also rebutted Mr Jaitley's contention yesterday that the country would become one of sales boys and girls if FDI in retail was allowed. He said this sent out the wrong message to those who earned a living selling goods.

Mr Jaitley in his speech yesterday had also scorned at government's win in the Lok Sabha, with the help of the BSP and SP. The BJP has called it a "technical victory but a moral defeat." That, said Mr Jaitley said made it a "lame duck government."

"When you are 18 short of majority, then you cannot run the government as you please. You cannot touch the 272 mark in Lok Sabha - you will need support and help. And whenever you need help, you have to compromise and pay a price. The country is worried that with regard to investigative agencies and the government's work practices - we have seen the compromises for the past four years. After yesterday's vote, those worries have gone up. After that figure you are a lame duck government, and you are dependent on support which is costly."

Soon after he said that, BSP chief Mayawati killed all suspense yesterday of how the government expected to cobble together numbers in the Upper House by announcing she would vote for FDI in retail. She used much of her speech to attack the BJP for criticising her walkout before the vote in the Lok Sabha.

In the Lok Sabha, the BSP had warned the government not to rush through with FDI in multi-brand retail since there were fears that small retailers and farmers would be adversely affected. A day later Ms Mayawati said in the Rajya Sabha, "What is good but is that it is not compulsory for all states. We have also considered whether to stand with communal forces. There can be disruption in the coming days. Important bills are pending, the government will get the excuse to escape important issues. That's why looking at plus points, the BSP will vote in favour of the government," Mayawati said.

Promoted
Listen to the latest songs, only on JioSaavn.com
There will be a political trade-off; the government could give in to Ms Mayawati's demands on the bill promotions in government jobs or on building memorials.  The government has called its Lok Sabha win a victory of pragmatism over politics.