Read inOther Languages
This Article is From Aug 06, 2019

"I'm Not A Doctor," Says Amit Shah After Question About Farooq Abdullah

During the debate of the Jammu and Kashmir Reorganisation bill in the Lok Sabha, Nationalist Congress Party leader Supriya Sule pointed out the veteran leader's absence, saying, "Farooq Abdullah sits next to me and today he is not there". 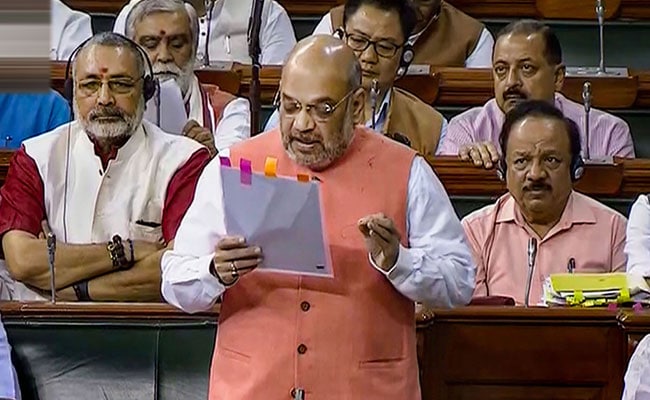 Union Home Minister Amit Shah said Farooq Abdullah is at home by his own will.

National Conference patriarch Farooq Abdullah has neither been detained nor arrested, Union minister Amit Shah said in Lok Sabha today amid opposition demands for the release of Kashmir Valley's mainstream leaders who had been kept in confinement since Sunday evening. Farooq Abdullah, the 81-year-old patriarch of the National Conference, has not been present in the house since Monday, when the government announced that the special status of the state has ended and that it would be bifurcated into two union territories.

During the debate of the Jammu and Kashmir Reorganisation bill in the Lok Sabha, Nationalist Congress Party leader Supriya Sule pointed out the veteran leader's absence, saying, "Farooq Abdullah sits next to me and today he is not there".

It was DMK's Dayanidhi Maran, who first raised the issue of Mr Abdullah's absence. "Farooq Abdullah, a member of this House, is missing. He is arrested and we have no intimation. You as a Speaker should protect the members. You should be neutral," Mr Maran had said.

After Ms Sule's comment, Union Home Minister Amit Shah, who introduced the bill in the lower house, shot back, "He has neither been detained nor arrested. He is at home by his own will."

Speaking to NDTV from Srinagar, Mr Abdullah contradicted the home minister, saying he had indeed been detained.

"I have no information about Farooq Abdullah, Omar Abdullah and Mehbooba Mufti," she said. "I appeal to the government that they should not feel isolated. They are not terrorists. They should be released in the interest of the democratic institutions," added the Trinamool chief, whose party has vehemently opposed the government's move on Kashmir.

Kashmir's mainstream political leaders have been jailed at secret locations.

This is unconstitutional & undemocratic.

It's also short sighted and foolish because it will allow terrorists to fill the leadership vaccum created by GOI.

The imprisoned leaders must be released.

Jammu and Kashmir's former Chief Ministers Mehbooba Mufti and Omar Abdullah --- who were placed under house arrest late on Sunday evening - were formally arrested yesterday. Mehbooba Mufti was taken from her home in Srinagar to a nearby government guest house.

The preventive arrest of Kashmir Valley's mainstream leaders came ahead of the government's move to end special status for the state and bifurcate it into two Union Territories. Amid a huge security build-up the government has also effected a clampdown on internet and phone services in parts of Jammu and Kashmir. All public meetings and rallies have also been banned.

Omar Abdullah has indicated that his party might challenge the government's move in court.