Meena Harris has been tweeting regularly since an international media report on the farmer protests and the government's crackdown led to posts from pop star Rihanna, climate activist Greta Thunberg and many others on Tuesday. 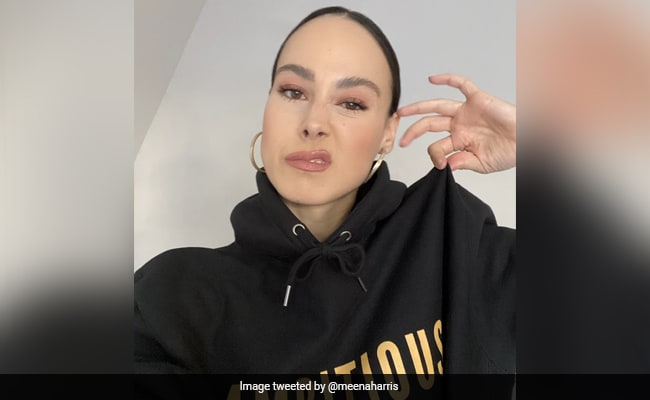 Meena Harris is the niece of Vice-President Kamala Harris.

American lawyer Meena Harris, the niece of Vice-President Kamala Harris, has shared a photo of a protest against her over her posts in support of the farmers' agitation.

"I spoke out in support of human rights for Indian farmers, and look at the response," Meena Harris tweeted on Thursday, sharing a photo by Reuters journalist Danish Siddiqui.

"I won't be intimidated, and I won't be silenced," she added in a pinned tweet.

The 36-year-old, also an author, has been tweeting regularly since an international media report on the farmer protests and the government's crackdown led to posts from pop star Rihanna, climate activist Greta Thunberg and many others on Tuesday.

"Why aren't we talking about this?" - this post by Rihanna, who has over 100 million followers on Twitter, started a barrage of tweets that have taken the two-month-old agitation on highways outside Delhi to the global stage.

Rihanna, Meena Harris, Greta Thunberg and many others shared a CNN story on Internet being suspended near the protest sites and other moves by the government.

"We ALL should be outraged by India's internet shutdowns and paramilitary violence against farmer protesters," Meena Harris tweeted.

As the tweets provoked a backlash in India, with a government statement and posts by celebrities, sportsmen and other public figures with the hashtags "IndiaAgainstPropaganda" and "IndiaTogether", images surfaced of a fringe group demonstrating against the international figures who spoke on the farmer protests.

The images have drawn condemnation on social media.

In the middle of the online frenzy, Delhi Police yesterday launched an investigation into a "toolkit" tweeted by Greta Thunberg, which it said was authored by a Canada-based Khalistani outfit. "We have registered a case for spreading disaffection against the government of India - it's regarding sedition --  and disharmony between groups on religious, social and cultural grounds, and  criminal conspiracy to give shape to such a plan," said Delhi Police Special Commissioner Praveer Ranjan.