The Congress, the RJD, the Samajwadi Party and several Left groups have all backed the farmers' bandh call, as have Tamil Nadu's DMK and Telangana's ruling TRS 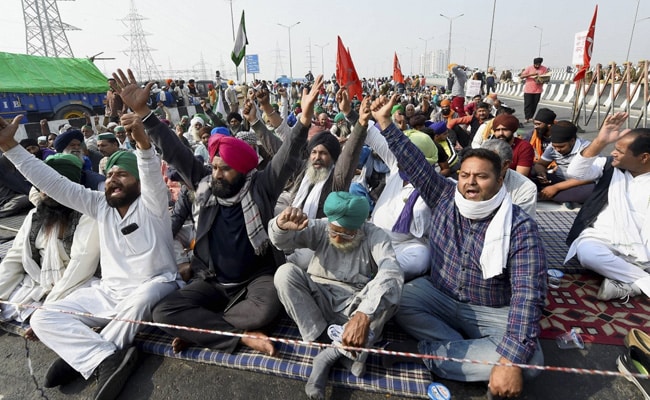 Opposition leaders from several parties, including the Congress, the DMK, the RJD, the Samajwadi Party, the newly-minted People's Alliance for Gupkar Declaration in J&K, and a collection of Left outfits, have issued a joint statement in support of Tuesday's "Bharat bandh", which has been called for by the thousands of farmers protesting against the centre's contentious new farm laws.

In their statement the opposition leaders said "(we) extend our solidarity with the ongoing massive struggle by Indian farmers... and support their call for a 'Bharat bandh' on December 8, demanding the withdrawal of retrograde agri-laws and the Electricity Amendment Bill".

"These new agri-laws passed in the Parliament in a brazen (and) anti-democratic manner (by) preventing a structured discussion and voting, threaten India's food security, destroy Indian agriculture and our farmers, lay the basis for the abolishment of MSP and mortgage Indian agriculture and our markets to the caprices of multi-national agri-business corporates," the statement said.

The opposition parties called on the centre to adhere to well-established democratic processes and norms and meet "the legitimate demands of our kisans-annadatas (farmers)".

National Conference leader Farooq Abdullah (for J&K's PAGD) and a number of Left parties - the Communist Party of India, the CPI(M), the CPI(ML), the All India Forward Bloc and the Revolutionary Socialist Party - also expressed support for the farmers.

On Sunday morning Delhi Chief Minister Arvind Kejriwal also tweeted in support of the farmers and the "Bharat bandh", saying that all members of the ruling AAP would participate in the shutdown.

Telangana's ruling TRS will also back the bandh call, with Chief Minister K Chandrashekar Rao extending "total support" and urging farmers to continue protests till all three laws are repealed.

Bengal's ruling Trinamool Congress said it will extend "moral support" to farmers and stage sit-ins in various areas in the state for three days.

Farmers and the centre met Saturday for a fifth round of talks that broke down over the core issue - scrapping of the farm laws.

The centre, while willing to amend the more problematic sections - is unwilling to completely recall the laws, while the farmers are insistent that the controversial legislations must go.

A sixth round has been scheduled for Wednesday.